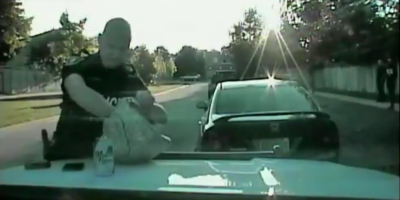 911 calls brought police out to a single-vehicle crash at a Vaughan intersection, around 7:00 Wednesday morning. Officers arrived to find a man and woman standing outside the vehicle, saying two open cans of beer were spotted on the road near the crashed car.

IMPAIRED – Proof that alcohol impairs good judgement as well as the ability to drive – male & female both arrested for impaired driving one vehicle that crashed into a pole. She was sitting in his lap while both driving drunk at 7 a.m. #NotOneMore pic.twitter.com/AXkAV1PzHu

Police say they discovered both the man and woman had been sitting in the driver’s seat, and both were at the wheel when the vehicle crashed. Officers say both reeked of booze and were placed under arrest. The 31-year-old Markham man and his co-pilot, a 26-year-old woman from Newmarket, both face charges of Impaired Operation, and Dangerous Driving.