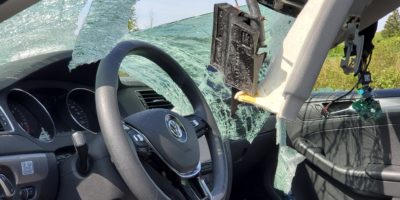 A 56-year-old Barrie man has been charged following that runaway tire incident in June that sent a Barrie woman to a Toronto trauma centre after her car was struck by the wheel from his vehicle.

Sgt Kerry Schmidt gives us the latest after a woman was struck by a tire on HWY400. One lane has been reopened in each direction through highway 89.

Sgt Schmidt had said the man’s vehicle was travelling northbound and somehow lost a wheel, which bounced into the southbound lanes, striking the woman’s vehicle as it approached Highway 89 near Cookstown. Police say she will make a full recovery.