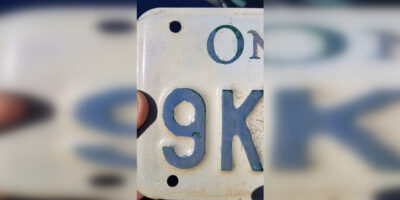 Someone’s facing charges after an arts-and-crafts number was done on a license plate.

The South Simcoe Police Service says a man on a motorcycle was stopped while speeding through a residential neighbourhood in Innisfil. On top of the speeding offense, police say his license plate was painted-over.

The plate should have been on an ATV and was originally green in colour. The lettering was painted blue to appear as though it belonged on a motorcycle instead.

A 25-year-old man is facing a charge of defacing a license plate and more.