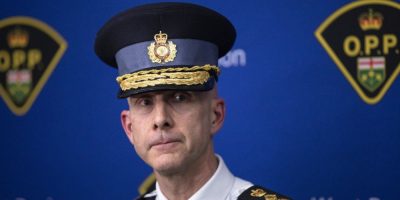 By Jordan Omstead in Hamilton

The man accused of killing an Ontario Provincial Police officer had been initially denied bail in a previous case and was later granted it upon review in the months before this week’s shooting, court documents show.

Randall McKenzie, 25, and Brandi Crystal Lyn Stewart-Sperry, 30, each face a charge of first-degree murder in the death of OPP Const. Grzegorz Pierzchala on Tuesday.

McKenzie was denied bail in December 2021, court documents show, as he awaited trial in Hamilton on a number of charges after he allegedly assaulted three people, including a peace officer, earlier that month. He was also facing a number of related weapons charges, including carrying a handgun with a defaced serial number.

But after the decision was reviewed, McKenzie was granted bail in June under strict conditions, includingthat he wear a GPS monitor, report to police twice a week, live with his surety, and not possess any weapons. He was ordered to only leave his residence with his surety for medical emergencies, to attend meetings with his lawyer or to attend counselling recommended by a local Indigenous centre.

When he failed to show up for a court date in August, a warrant was issued for his arrest, documents show. Court documents indicate he has not since appeared in relation to that case.

The documents do not indicate the reasons for either bail decision. An accused can request that reasons for a decision remain under a publication ban, though it’s unclear whether that action was taken.

Speaking to reporters Wednesday night,OPP Commissioner Thomas Carrique said he was “outraged” that McKenzie had been out on bail before he allegedly killed Pierzchala.

“I know there’s a lot of interest to see that changes are made to ensure, where possible, people who are charged with violent offences that are firearms related are not in those positions moving forward,” he said during a news conference.

On Thursday, Ontario Premier Doug Ford said Carrique’s comments were the latest plea for the federal government to address what he called the revolving door of violent criminals caused by “the failed bail system.”

“Too many innocent people have lost their lives at the hands of dangerous criminals who should have been behind bars – not on our streets,” Ford said in a statement.

“Enough is enough. More must be done to fix a system that is far too often sacrificing the safety of our public and police officers instead of cracking down on the perpetrators who repeatedly commit these heinous crimes.”

A 2022 study published by Cambridge University Press that reviewed hundreds of Ontario bail decisions found the system was characterized by conditions and surety releases that eroded an accused presumption of innocence and the right to bail, though noted there had been some shifts since the Supreme Court of Canada reaffirmed bail principles in a 2017 decision.

In a 2020 decision, the Supreme Court acknowledged widespread problems continued to exist with the ongoing imposition of conditions that are “unnecessary unreasonable, unduly restrictive,” and “effectively set the accused up to fail.”

The decision also restated that the law requires bail judges to give particular attention to the circumstances of accused persons who are Indigenous or those who belong to a vulnerable population overrepresented in the criminal justice system.

McKenzie is from the Onondaga First Nations of the Six Nations of the Grand River Territory, a 2021 parole document says. At that time he was serving a nearly three-year sentence, the document shows, after he robbed a restaurant at gunpoint and then stole the owner’s vehicle in 2017 before turning himself in a month later.

The parole board said he had a history of violence, including domestic violence.

It was also evident to the board, the document shows, that McKenzie had suffered “the negative impacts of colonialism.” He suffered abuse, addiction, and was disconnected from his family and cultural community. McKenzie’s biological parents “struggled with alcohol,” he was adopted out of their care at age two, and he believed his grandfather attended residential school, the parole documents show.

OPP said Thursday funeral plans for Pierzchala were expected to be announced in the coming days, with a procession slated to drive from Toronto to Barrie, Ont., Friday.

Police said the 28-year-old officer was ambushed when he responded to a call for a vehicle in a ditch just west of Hagersville, Ont., on Tuesday afternoon.

The suspects fled the scene after the officer was shot and stole a vehicle, police said. They were arrested later that day.