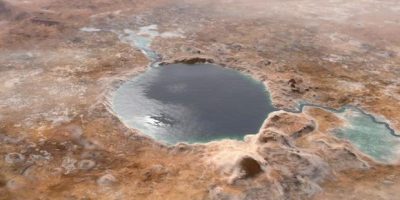 NASA’s Perseverance rover is on course to plunge into the atmosphere of Mars Thursday for a nail-biting descent onto the surface of the red planet. Its landing zone is the floor of a 28-mile-wide (45-kilometre) crater where a body of water the size of Lake Tahoe once sparkled in the light of a distant sun.

Eons ago, the ancient lake, hundreds of feet deep, was fed by a cascading river that carved a channel through the towering rim of Jezero Crater, depositing sediments that fanned out in a broad delta across the bowl-like floor.

The lake is long gone, but the rocky remnants of the river channel and delta are clearly visible from Mars orbit today, tangible reminders of an age 3 to 4 billion years ago when the red planet was a warmer, wetter and much more hospitable world.

The question is, did life ever arise on Mars, however briefly, before the planet lost its magnetic field and most of its atmosphere, before liquid water vanished and the planet became the frigid, dry desert seen today, one inhospitable to life as it’s known on Earth.

Jezero Crater represents a golden opportunity to find out. And what scientists learn from it could shed new light on one of humanity’s most profound questions: Are we alone? Or did life, however primitive, arise on at least one other planet and, by extension, might it exist on other planets across the cosmos?

If microbial life did, in fact, flourish on Mars some 3.5 billion years ago, when life on Earth was gaining a foothold and water was flowing into Jezero, telltale “biosignatures” may have been dispersed across the lake, settling to the bottom where they could be preserved in layered deposits.

“Lakes on Earth are both very habitable and inevitably inhabited, that’s the first attraction,” project scientist Ken Farley said of Jezero Crater. “The second attraction is a delta … is a good place for evidence of life to be deposited and then preserved for the billions of years that have elapsed since this lake was present.”

To find out, NASA is sending Perseverance, the most scientifically sophisticated, complex and expensive Mars rover ever built, to traverse those deposits. It will collect promising rock and soil samples, seal them in small lipstick-sized containers and deposit them on the surface in carefully identified caches.

To pick up the samples, NASA plans to launch another lander and rover later this decade. A European Space Agency orbiter will then snag them and ferry the samples back to waiting scientists on Earth.

“Perseverance is going to drill and prepare samples for return and cache them on the surface of Mars,” said Lori Glaze, director of planetary science at NASA Headquarters. “In 2026, a fetch rover will be launched to collect those samples and bring them to a rocket that will launch them into orbit around Mars. Another orbiter will rendezvous and capture those samples for safe delivery to Earth.

“If it sounds complicated, it is,” she said. “But NASA’s investments in developing autonomous robots and landing large payloads on Mars have laid the groundwork for a successful sample return campaign.”

Assuming Perseverance lands just beyond the delta on the floor of Jezero Crater, flight planners have mapped out a notional 15-mile-long (25- kilometre) traverse that will carry the rover to the base of the delta, up to its surface and then across to the crater rim where the ancient river channel cut a winding gorge.

Along the way, the rover’s instruments will study its surroundings, collect high-resolution photographs, drill into selected rocks and formations and collect samples where needed.

“This is a pathway that connects together all of the different habitable environments that we think existed within this lake and in its surroundings,” Farley said. “We will drive up onto the delta and then move up to possible shoreline environments. And then we will climb up the crater rim. And just for reference, that crater rim is several thousand feet high.

“This is a long traverse, it’ll take many years for us to do this,” he said. “This will allow us to come up with the best possible set of samples to be brought back to Earth to answer the major questions that we have about Mars and about life.”

The intricate sample collection hardware built into Perseverance is the most complicated mechanism ever sent to another world.

Samples will be collected by a drill on the end of the rover’s robot arm and deposited in the maw of the collection system. During processing, each sample will be autonomously placed into a lipstick-size airtight container in a rotating carousel. An internal robot arm then will mount the sealed containers in storage slots until they are dropped to the surface.

One or more sample caches are planned, at carefully noted locations, but a few will remain with Perseverance in case of problems that might prevent the planned fetch rover from finding or retrieving a surface cache.

“We’re trying to do something that would take probably a team of several geologists and a truck and some temporary laboratory equipment to be able to do (on Earth). We’re going to pull samples, rocks, intact samples out of rocks, we’re going to hermetically seal those samples immediately into sterile, hyper-clean sample tubes … for eventual return to Earth.”

Given the time needed to get the samples back to Earth, it’s likely many of the scientists currently working on the Perseverance mission will have moved on, leaving it to the next generation to carry out the laboratory analysis.

“The samples will return to Earth sometime in the 2030s and they will be analyzed for decades after that,” said Farley. “The scientists who will analyze these samples are in school today; they might not even be born yet.”

Perseverance, he said, is “a serious investment in the future of our science.”

banner image – An artist’s impression of Jezero Crater some 3.5 billion years ago when it held a 28-mile-wide lake fed by a river cutting through the crater rim, visible at upper left. Water drained from the lake through a channel at centre right. NASA/JPL-CALTECH