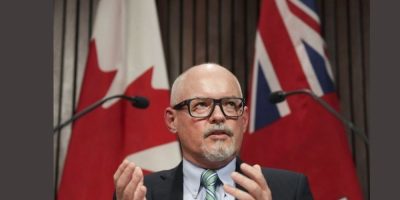 By Allison Jones and Paola Loriggio in Toronto

Ontario won’t be reinstating its mask mandate despite a sixth wave that won’t peak for several more weeks, the province’s top doctor said Monday as he announced expanded eligibility for COVID-19 PCR testing and antiviral treatments.

Public health indicators have been worsening recently, including the percentage of tests that are positive, the number of hospitalizations, and COVID-19 activity in wastewater surveillance, chief medical officer of health Dr. Kieran Moore said at a press conference.

“It is clear that we are in the sixth wave of this pandemic driven by the BA.2 variant,” Moore said.

“While we will not be reinstating a broad mask mandate at this time, we should all be prepared that we may need to resume a requirement for mask wearing in indoor public spaces if a new variant of concern emerges, (if there is) a threat to our health-care system, or potentially during the winter months when COVID-19 and other respiratory viruses are likely to circulate again.”

The peak may see up to 600 patients in ICU, Moore said, but the province’s health bureaucracy has assured him hospitals have capacity to care for those people. The health system is being protected through strong population immunity, Moore said, which includes both high vaccination rates and an estimated 5.3 to six million cases of COVID-19 since December.

Moore said he strongly recommends people continue to wear masks in indoor public spaces, and urged residents to get their booster doses, because they are helping to keep people out of hospital when infected.

Premier Doug Ford, at a separate and unrelated announcement, said people should continue to be cautious with masking.

“I think it really comes down to common sense,” he said. “We’ve been through this for two years. When you walk into a real crowded room, throw the mask on. No one’s going to force you, but I would recommend it.”

Mask mandates were lifted in most public settings and schools on March 21, and the province had set April 27 as the date it plans to eliminate masking requirements in remaining places, including long-term care homes, hospitals and on public transit.

Moore is reviewing that April 27 date and said it makes “tremendous sense” to maintain those mask requirements.

“We think this wave is not going to be settling until the middle or end of May and as a result, we’re looking at extension for all of those high-risk facilities,” he said.

The province is expanding access to PCR testing and antiviral treatments in an attempt to keep even more people out of hospitals.

Access to Paxlovid has largely been limited to clinical assessment centres and primary care providers, but the province said participating pharmacies will start dispensing Paxlovid this week.

A positive result for COVID-19 on a PCR or rapid test is required to be assessed for antiviral treatment, which must be started within five days of symptom onset.

Moore’s press conference Monday was his first in almost five weeks. It came on the heels of a report by Public Health Ontario that shows COVID-19 cases, test positivity rates and hospitalizations have gone up since the province ended mandatory masking in most indoor spaces.

“The full impact of lifting masking and other measures may not yet be observable, given limited PCR testing eligibility and lagging hospitalization data,” the report said.

It proposes bringing back indoor masking and extending masking mandates in high-risk settings as possible elements of a “layered” strategy to mitigate a surge in cases.

The report also warns that the number of Ontario children experiencing severe illness from COVID-19 is likely to increase given the increased transmissibility of the BA.2 subvariant of the virus, the removal of public health measures and the limited vaccine eligibility and two-dose coverage in those under the age of 12.

“There are many concerns right now, both with the lack of masking in the current context and also the potential for increased removal of measures into the next few weeks, and I hope that there will be reconsideration to all of that given that the sixth wave is way worse than even the worst modelling scenarios from the Ontario science table,” he said in an interview.

“I think now’s the time to reconsider.”

Liberal House Leader John Fraser said the government has previously waited too long to act in response to previous waves and the province paid the price.

“We’re in a pandemic,” he said. “It’s a fire. It burns and the longer you wait, the faster it burns.”

Last week, the province expanded eligibility for fourth doses of a COVID-19 vaccine to those 60 and older, as well as Indigenous residents and adult members of their households. Moore said he got his fourth dose on Sunday.

Banner image: Dr. Kieran Moore, Ontario’s Chief Medical Officer of Health speaks at a press conference during the COVID-19 pandemic, at Queen’s Park in Toronto on Monday, April 11, 2022. COVID-19 cases continue to rise in Ontario and across Canada as many provinces have lifted most restrictions including masks. THE CANADIAN PRESS/Nathan Denette