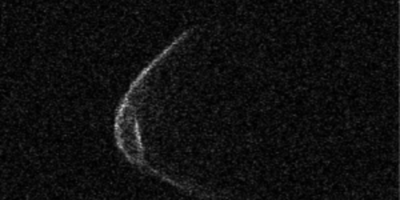 If you’re planning to visit Earth in the year 2020, it’s important to be wearing a face mask to protect yourself from the coronavirus. And apparently the rule doesn’t only apply to humans — an asteroid speeding toward Earth appears to know about the pandemic and is sporting a face mask of its own.

An asteroid called 52768 (1998 OR2) will zoom past Earth next week. Astronomers at the Arecibo Observatory in Puerto Rico are tracking the asteroid, and couldn’t help but notice a familiar silhouette after capturing a new radar view of the object.

“The small-scale topographic features such as hills and ridges on one end of asteroid 1998 OR2 are fascinating scientifically,” research scientist Anne Virkki said in a press release Thursday. “But since we are all thinking about COVID-19 these features make it look like 1998 OR2 remembered to wear a mask.”

Arecibo data confirmed that 1998 OR2 is about 1.2 miles across and rotates approximately once every four hours. Scientists at NASA’s Center for Near-Earth Object Studies said it will make its closest approach to Earth on April 29, but it will still be 16 times farther away than the moon — nearly four million miles.

1998 OR2 is classified as a Potentially Hazardous Object, which are larger than 500 feet and come within 5 million miles of Earth’s orbit. After its discovery, NASA said it is “large enough to cause global effects” if it impacted Earth, but poses no threat to the planet.

And it won’t be the only time the asteroid pays Earth a visit. And next time, it’ll come a little closer.

“The radar measurements allow us to know more precisely where the asteroid will be in the future, including its future close approaches to Earth,” says Flaviane Venditti, a research scientist at the observatory. “In 2079, asteroid 1998 OR2 will pass Earth about 3.5 times closer than it will this year, so it is important to know its orbit precisely.”