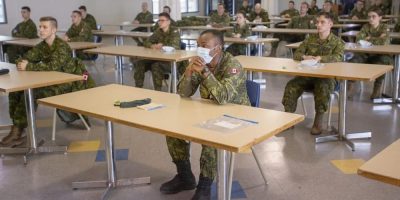 The Canadian Armed Forces is dealing with a mounting personnel shortage, as new figures show military recruitment and training have failed to keep pace with plans to expand the force, resulting in more than 12,000 unfilled positions.

The figures provided to The Canadian Press underscore recent warnings from chief of the defence staff Gen. Wayne Eyre and other senior commanders about the state of Canada’s military, which has faced growing demands at home and abroad.

And while military officials have previously blamed the COVID−19 pandemic for cutting into the recruitment and training of new members, one defence analyst suggests the recent sexual misconduct scandal has also taken a toll.

“The Canadian military had a pretty bad year in terms of its public reputation, and I would imagine that would have a negative impact on more than just the number of women coming into the Forces,” said Canadian Global Affairs Institute president David Perry.

While the Armed Forces previously aimed to have 68,000 regular−force members and 29,000 reservists on duty at any given time, the Liberal government has authorized it to expand those numbers to 71,500 and 30,000, respectively.

The expansion is considered vital to ensuring the military is prepared to defend against growing global instability in Europe and Asia, as well as emerging threats in space, online and at home in terms of natural disasters and the COVID−19 pandemic.

Yet while the military is supposed to have added 4,500 troops, it instead shrunk by more than 700 since the end of 2020. Taken altogether, the Canadian Armed Forces currently needs more than 6,750 regular force members and nearly 5,500 additional reservists.

And those figures could grow as military commanders are currently struggling with whether to release up to 900 soldiers who have refused defence chief Gen. Wayne Eyre’s order to get vaccinated.

Making matters worse, the figures show more than 10,000 regular−force members are currently unavailable for duty because they are untrained, sick or injured.

Eyre has previously acknowledged the military is “fragile” as COVID−19 forced restrictions on recruitment and training at a time when the military was facing growing demands in Canada and overseas.

Those include requests to help with provincial vaccination efforts, providing emergency assistance in response to natural disasters, and continuing to conduct operations in Europe, the Middle East and the Asia−Pacific region.

The Royal Canadian Air Force has struggled with a shortage of pilots and technicians, while Royal Canadian Navy commander Vice−Admiral Craig Baines has said the military needs 1,000 more full−time sailors to crew its new warship fleet.

While Eyre has spoken of a dedicated regrouping and reconstitution of the military after the pandemic has ended, Perry said there will be long−term effects, as the current recruitment and training system is built to accept only a certain number of new troops.

There will also be “ripples” in the military’s experience levels, he said, which will make managing the force much more difficult from a human resources perspective.

“You can’t just flip the switch and suddenly eradicate that deficit in one year,” Perry said. “It’s going to take some considerable amount of time to clear.”

This report by The Canadian Press was first published Jan. 18, 2022.