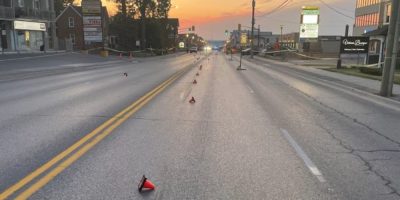 South Simcoe Police say a motorcyclist, a 32-year-old Bradford man, is dead after being struck by two vehicles in Bradford.

Early Saturday morning, around 12:20 a.m., police say they responded to a report of a collision on Holland Street East and Barrie Street.

Once there, police say they determined the motorcyclist was rear-ended by the first vehicle, then struck by a second vehicle while travelling eastbound on Holland Street.

They say the first vehicle mounted a curb and crashed into a building – severing a gas line – the driver fled on foot.

The K9 Unit attended and arrested the driver a short distance from the collision.

Officers say the second vehicle’s driver remained at the scene and cooperated with police.

The motorcyclist was pronounced deceased at the scene.

Holland Street was closed from Toronto Street to Barrie Street for 10 hours while officers conducted an investigation.

A 29-year-old Bradford man has been charged with impaired driving causing death, dangerous operation causing death, and failing to remain at the scene of an accident.

Police say speed and alcohol are factors in this collision, and believe there are several witnesses along Holland Street that may have seen the vehicles involved prior to the collision.

Police are appealing to anyone with information and security or dash camera footage to contact Constable Capeloa of the Traffic Unit at 905-775-3311 extension #1490, tiago.capeloa@southsimcoepolice.ca or contact Crime Stoppers.