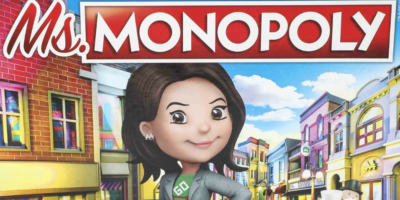 Toymaker Hasbro is putting its own spin on the gender pay gap debate, announcing a new Monopoly game in which women players get more money than men.

When “Ms. Monopoly” hits shelves starting this week, she will be the first character other than “Rich Uncle Pennybags” — the game’s traditional mascot and described by Hasbro as Ms. Monopoly’s uncle — to appear on the cover of the iconic board game.

In a news release, Hasbro said that “while Mr. Monopoly is a real-estate mogul, Ms. Monopoly is an advocate whose mission is to invest in female entrepreneurs.”

The twist is intended to draw attention to the real-world disparity between what women and men are paid at work. Female employees typically earn 79 cents for every dollar that men earn.

But the toy manufacturer also noted that “if men play their cards right, they can make more money too.” For example, a female player who gets one of the game’s 16 “Community Chest” cards can collect 200 Monopoly dollars for publishing an article on successful women entrepreneurs, while a man can earn 250. Watching the newest superhero movie with a female lead will earn female players 50 Monopoly dollars and a male player 100.

Instead of scooping up real estate properties, players in the new board game can jockey for groundbreaking inventions and innovations made possible by women, including WiFi, chocolate chip cookies, bulletproof vests and solar heating, Hasbro said. Ms. Monopoly players can even zoom ahead on the board through rideshares.