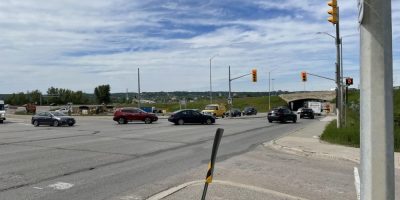 News release – from City of Barrie

The Ministry of Transportation (MTO) is constructing a new interchange at Essa Road and Highway 400 and widening Essa Road to six lanes. Starting this week, drivers can expect some traffic delays along Essa Road as a result of this work.

Starting June 20, 2022, pedestrian access will be restricted under the Highway 400. While the sidewalk along Essa Road is closed, a regularly scheduled Barrie Transit bus will bring pedestrians through the work zone for free. Pedestrians can get on the bus at bus stop 296 and 300 to the east and west of the construction limits and it will bring them to the other side. This service is expected to be in place until the end of 2024.

Full closures underneath the Highway 400 along Essa Road will be required on three occasions to allow for the construction of new bridge girders and the demolition of the old bridge. The City will communicate these closures in a advance.

This construction project is being led by the Ontario Ministry of Transportation (MTO) and includes significant roadwork on highway 400, between Harvie Road and Tiffin Road, along with a widening of Essa Road to six lanes between Fairview Road and Bryne Drive/Ardagh Road. For more information, visit the ​Essa Road Interchange & Highway 400 Overpass Replacement webpage via www.barrie.ca/roadwork.