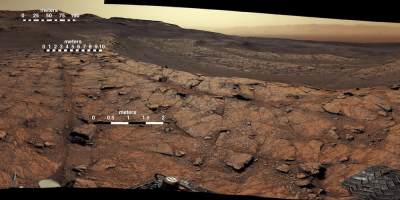 NASA’s Curiosity rover just celebrated a major milestone — 3,000 days on the surface of Mars. To mark the occasion, the space agency has released a stunning new panorama of the red planet, captured by the rover.

Curiosity landed on Mars on August 6, 2012. However, scientists track its activities in Martian days, called “sols,” which are a bit longer than Earth days, at 24 hours and 39 minutes.

The epic new panorama, released by the space agency on Tuesday, captures the view of the 96-mile-wide Gale Crater and part of Mount Sharp, its central mountain. It was taken by Curiosity’s eyes, AKA the Mast Camera.

Curiosity has been gradually climbing and exploring the 3-mile-tall Mount Sharp since 2014. Its most recent find, captured in the panorama, is a series of distinctive “bench-like rock formations,” which can form due to erosion, as well as landslides.

The mountain’s rock layers were shaped by bodies of water billions of years ago. “Curiosity’s team has seen benches before in Gale Crater, but rarely forming such a scenic grouping of steps,” NASA said.

“Our science team is excited to figure out how they formed and what they mean for the ancient environment within Gale,” said Curiosity’s project scientist, Ashwin Vasavada of NASA’s Jet Propulsion Laboratory.

The panorama is actually a composite of 122 images taken by Curiosity on November 18. After it was taken, the rover continued to higher ground, working its way toward the next major layer, called the “sulfate-bearing unit.”

Since its mission began, Curiosity has been in search of conditions that may have once supported life, gathering rock samples along the way to analyze.

It’s had a number of major accomplishments, including finding evidence the planet once had persistent liquid water, discovering that the planet was once suitable for life and finding organic carbon molecules, the building blocks of life. It also found present and active methane in the red planet’s atmosphere, detected radiation levels that could post health risks to humans, and concluded that Mars’ atmosphere used to be much thicker than it is today.

Curiosity will soon be joined by its sibling rover, Perseverance, when it lands on the red planet in February. Perseverance is designed to bring samples from Mars back to Earth, marking the first round-trip mission to another planet.