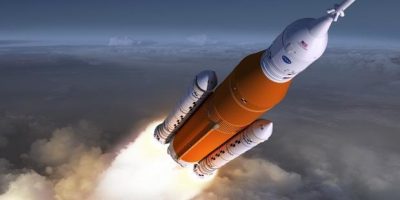 NASA and Boeing test fired a gargantuan Space Launch System rocket for the second time Thursday, a full-duration eight-minute “hot fire” needed to clear the way for a long-delayed maiden flight late this year or early next to kick off the space agency’s Artemis moon program.

Two months after glitches cut short an initial attempt on January 16, the 21-story SLS core stage’s four shuttle-heritage RS-25 engines ignited at 120 millisecond intervals at 4:37 p.m. EDT, quickly throttling up to a combined thrust of 1.6 million pounds of thrust with an ear-splitting roar.

The white-hot exhaust plumes instantly vaporized torrents of cooling water flooding the base of the massive B-2 test stand at NASA’s Stennis Space Center in Mississippi, just east of New Orleans, sending huge clouds of steam billowing into a cloudless blue sky.

While rockets normally fade from view and hearing as they climb toward space, the SLS booster remained in firmly in place, blasting a nearby viewing area with a crackling wall of sound as the engines burned through more than 700,000 gallons of liquid oxygen and hydrogen propellants.

The test run called for throttling the engines down and back up as they will be during an actual flight, testing the rocket’s thrust vector control, or steering, system and monitoring how propellant tank pressures are maintained as the fuel level changes.

Data from hundreds of sensors were recorded throughout to precisely characterize a wide variety of parameters, including critical vibration levels at different thrust settings. The data will feed into 10 “detailed verification objectives,” or DVOs, required to demonstrate the rocket is ready for flight.

Mission managers said they expected to collect all the data needed in the first four minutes or so, but they let the engines run twice that long to simulate an actual climb to space. That also allowed them monitor performance when the tanks are nearly empty and the rocket weighs a fraction of its initial 2.3 million pounds.

“This is not by any means a vanilla firing the core stage,” Boeing SLS program manager John Shannon said before the test. “Since it’s a highly instrumented vehicle, we’re taking that opportunity to do some very aggressive maneuvers of the thrust vector control system. … It’s going to stress the vehicle.

“Our primary goal is to not only get the hot fire data but also to protect the stage (for use as) the first flight article. So, we’re kind of threading a needle here between keeping the vehicle safe and gathering this data.”

The engines ended up firing for eight minutes and 19 seconds. John Honeycutt, manager of the SLS program at the Marshall Space Flight Center in Huntsville, Ala., said “everything that we’ve seen in the test today looks nominal. So, I would say the core stage got an A-plus.”

Assuming a more detailed analysis confirms that, “it is still possible to fly by the end of the year,” Steve Jurczyk, NASA’s acting administrator, told CBS News before the test. “Now, we don’t have a lot of schedule margin to the end of the year (but) it’s possible.”

That said, he added, “we know that integrating a vehicle at the Cape the first time through, we’re going to find some issues and so, we could push past the end of the year. But if things go well, we absolutely could get the work done and launch in the November-December time.”

NASA is counting on the Space Launch System rocket to propel the agency’s Lockheed Martin-built Orion crew capsules on flights back to the moon, using commercially built landers to carry astronauts down to the surface for the first time in 50 years.

For an actual launch, the Space Launch System first stage will be attached to a pair of already tested Northrop Grumman solid-fuel boosters, each one generating 3.6 million pounds of thrust, and a hydrogen-fueled upper stage topped off by an Orion crew capsule.

The fully assembled SLS rocket will weigh 5.75 million pounds, stand 322 feet tall and generate 8.8 million pounds of thrust at liftoff, making it the most powerful operational rocket in the world.

It also will be one of the most expensive ever built. NASA’s inspector general reported last March that total SLS program costs were expected to climb above $18 billion by the time the Artemis 1 rocket finally takes off.

The high price tag has prompted critics to argue in favor of less powerful, but much less expensive, boosters like SpaceX’s Falcon Heavy. But NASA managers say the SLS is the only rocket available in the near term that is capable of accommodating the Orion crew capsule and other large components envisioned for the Artemis program.

During the initial test run in January, the booster’s flight computer shut down the engines about one minute into the firing after detecting low pressures in the hydraulics used by the thrust vector control steering system. That problem was blamed on software, which was modified for the second attempt.

Other adjustments were made, along with repairs of a liquid oxygen valve that combined to push the second attempt to Thursday.

If analysis of telemetry confirms the rocket performed properly the second time around, engineers will spend about a month carrying out detailed inspections and readying the core stage for shipment by barge to the Kennedy Space Center.

Once in Florida, the stage will be bolted to a pair of already-assembled solid-fuel boosters, each one taller than the Statue of Liberty, followed by attachment of its waiting second stage and an Orion crew capsule.

Assuming no other major problems develop, NASA could be ready to launch the first SLS on an unpiloted maiden flight — Artemis 1 — before the end of the year, sending the Orion capsule on a long, looping flight around the moon and back.

The first piloted flight, Artemis 2, would carry astronauts on a similar around-the-moon mission before sending the next man and the first woman to the lunar surface in the program’s third flight.

Working on a schedule imposed by the Trump administration, NASA planned to launch the Artemis 2 mission in the 2023 timeframe, followed by a piloted moon landing by the end of 2024.

But Congress has not yet provided the full funding needed for a new lunar lander and while the Biden administration has indicated support for the Artemis program, it’s not yet clear when a landing could be attempted.