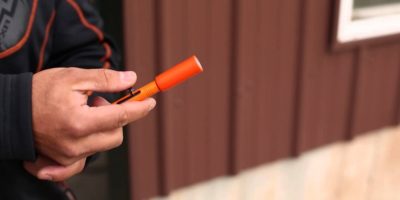 What was believed to be the sound of gunfire brought out the OPP’s Emergency Response team to a Huntsville home.

The sound of shots fired rang out around 3:00 Monday afternoon, bringing police to the area of King Street. A few streets were closed in the interset of public safety, as the OPP tactical unit moved in with a crisis negotiator to surround a home believed to be where the sound came from.

Shortly before 6:30 last evening, a 33-year-old Huntsville man left the home and was immediately arrested. Police say a bear banger was located, a handheld distraction device similar to a flare, is believed to be the source of the gunfire sound. Two airsoft guns were also seized.

As there were no illicit weapons present, and no guns discharged, the man was held overnight in relation to previous offenses, but was not otherwise charged.