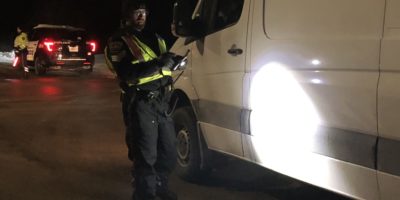 While the Festive RIDE program gets plenty of headlines, South Simcoe Police say taking alcohol and/or drug impaired drivers off the road happens year round.

“We have found RIDE is effective 24 hours a day,” says Sgt Dave Phillips. “Whether that be people coming home after a night of drinking not realizing they have alcohol in their system, or in the middle of the night on a dimly lit back road, we are out there to make sure people think twice before drinking and driving or using drugs and driving.”

Phillips believes the message about not driving impaired is getting through slowly. That doesn’t mean South Simcoe Police are letting down their guard. He says there is always new generations coming to the road, so police have to keep the pressure up and presence up.

With the legalization of cannabis, Phillips says they have seen an upswing in the use of drug impaired drivers, but he is quick to add that use was there in the past, now police have the ability to determine and detect it.

“We have roadside screening devices that are able to detect cocaine and marijuana use, as well as drug impaired experts that are able to evaluate a person to determine if they are under the influence of drugs while driving.”

Besides taking impaired drivers off the roads, another positive aspect to RIDE spot checks is the response from most citizens.

“We constantly get words of appreciation from the public,” says Phillips. “It’s not uncommon for them to come by and drop off coffee’s and really show their true appreciation for what we are doing.”

Phillips says we all share the same roads and it’s important that the roads are safe for everyone to use.