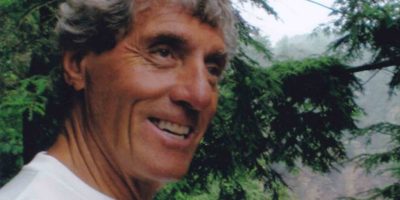 When people think of Peter Head and his impact on Simcoe County, their first reaction is to smile. This man behind the microphone, telling us which ski resorts were open and how much snow base they had. This man who anchored a sports program called HeadStart in the early days, the 60’s, of CKVR Television. This man who was the energy behind the Ontario Tourism Building (now long gone) that was actually a pull-off on Hwy 400, just south of the Dunlop St exit, where he told the world about everything happening in Simcoe County.

Peter Head was a man in the middle of it all.

And he lived it all, too. He loved the outdoor part of life… nature, cycling, skiing, tennis, hiking, snowshoeing, gardening, birds.

Back to the beginning, in Regina, SK where he was born in 1937 to parents Audrey and Frank Head.  Of course, both have passed, as has Peter’s brother, Jack.

As a youngster, the family moved to Simcoe County and Peter cut a “figure“ in the halls of Banting Memorial High School. Just imagine his impact on sports teams there!

His media career began in radio, on CFRB in Toronto where he had a recreational show called Ask Peter Head. Indeed! Ask Peter anything about recreational activities in Ontario and the man behind the mic could tell you.

Media took him through his CKVR years, his Ontario Tourism years, and his final official ‘job’ as Director of Communications for Metro Toronto and Regional Conservation Authority, a post he held from 1975-1991.  ‘Retirement’ for Peter included managing commercial properties for clients in Barrie, Shelburne and Midland.

Looking beyond the microphone to the man, Peter was dad to John and grandfather to Holly Sylvester, both residents of B.C. He had an extended heart family that included Liz, Brenda, Debbie and their children and grandchildren. He was an engaged listener who connected and supported people. He was equally comfortable in the community of friends and with his own company.

While Peter thrived outside he was equally soothed by easy listening music, enhanced by the voices of Sarah Brighton and Frank Sinatra. And Peter definitely followed Sinatra’s teachings…he did it his way!

Friends, family, associates are invited to gather to celebrate Peter Thursday, December 12 at the Heights of Horseshoe Ski Resort on 1106 Horseshoe Valley Rd. From 12 noon to 3 pm there will be time for memories, fellowship and celebration of a guy who lived and loved outdoors. In lieu of flowers, please consider contributing to Gilda’s Club Simcoe Muskoka, 10 Quarry Ridge Rd, Barrie, ON  L4M 7G1    https://gildasclubsimcoemuskoka.org/ways-to-give/