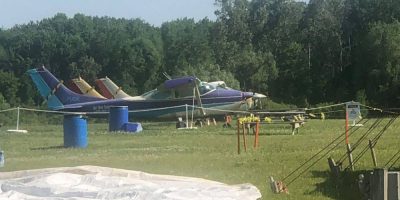 A man is dead following an incident involving a local skydiving club on Thursday afternoon.

First responders, including the South Simcoe Police Service and Innisfil Fire and Emergency Service, were called to the area of 10 Sideroad and Line 5 of Innisfil shortly after noon Thursday. They were responding to a 911 call from a local skydiving club who reported they were trying to locate one of their skydivers without success. Of the four who had jumped from the plane, three were accounted for.

The body of a 28-year-old Toronto man was located in a farmer’s field nearby. Police have yet to release any details of the victim or the circumstances leading to the incident that claimed his life, other than to say he was not an employee of the club but was an experienced skydiver.