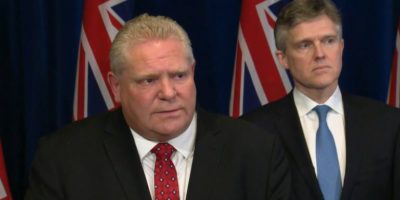 Some harsh truths were revealed Friday as Ontario health officials shared what they are forecasting. The death toll from Covid-19 is expected to be between 3,000 to 15,000. This month alone officials expect 80,000 cases of COVID-19 and 1,600 deaths. It could have been much, much worse. Without public health measures, Ontario’s modelling projected 100,000 deaths.

Officials expect the pandemic to last anywhere from 18 months to 2 years. Removing physical distancing restrictions is ‘some way off,’ according to Dr. Peter Donnelly, President and CEO, Public Health Ontario. “The goal is driving down COVID-19’s reproductive rate and chopping the top off the curve.”

“The numbers collectively show that we are saving lives and we act as quickly as possible as the data changes,” said Ontario Premier Doug Ford.

Dr. Donnelly laid out provincial modelling. “The thing that is striking from the data is the high mortality rate in those over the age of 80, it is 16%,” said Donnelly.

Dean of Dalla Lana School of Public Health, University of Toronto says by the end of April the province’s model shows 1,600 deaths without strong action. That number could be as low as 250 with increased measures. He says 4,400 deaths have been prevented by the current action the province took.

Donnelly called the following information extremely disturbing. Projections of Public Health Ontario that shows over the full course of this pandemic, which may last for 18 months or even two years, had we done nothing… Ontario may have suffered 100,000 deaths. Thankfully that is not the position we are in.”

“Every year in Ontario we lose about 1,350 people to the normal seasonal flu…when you think the mortality to this thing [ Covid-19] is 10 times higher, without a vaccine …and suddenly the figure of 15,000 becomes entirely probable. We need to bare down and take additional measures to keep the number closer to 3,000 and not 15,000 deaths,” said Donnelly.

Dr. Donnelly was asked if citizens should wear masks. “masks should be preserved for those who need them most, our most valued front line health care workers.”

What happened in Germany and South Korea

Donnelly said it’s about breaking the chain of this virus.”It’s been done very well elsewhere.” The second thing he stressed is increased testing. “This needs to be a priority. We need to use our testing strategically.”

When commentators and officials talk about ‘getting ahead of the curve’ the general consensus can equate to being more like South Korea and Germany.

The Germans had an effective test in mass production early on. Also, German politicians agreed to mass testing from the start and they were able to test 12,000 people a day. The South Koreans were able to test 15,000 people per day and quickly took drastic measures to identify and isolate people.

Ontario reported that as of Thursday, there were 462 new cases across the province, for a total of 3,255 with 67 deaths. Nationwide, Canada hit over 10,466 confirmed cases of Covid-19 on Thursday with 131 deaths, and 1,528 recoveries from the virus. Prime Minister Justin Trudeau says more data and federal modelling will come out soon, but he didn’t reveal those models or when during his news briefing Friday.

“The biggest variable in shaping these projections is you and your behaviour. You must listen to the world-class doctors…ignoring them puts lives at risk,” said Trudeau.

There are now over 1 million confirmed cases worldwide, and the death toll surpassed 50,000, according to tracking by Johns Hopkins University

Canada’s top doctor, Dr Theresa Tam confirmed at least 50 of the deaths in Canada have been associated with long-term care homes, retirement homes and other health care facilities in Canada.

Those who’ve tested for the novel-coronavirus in Ontario can now go online for their results. The Province announced a new user-friendly online portal for the public to easily access their COVID-19 lab test results.

Find out your test results online

“With this new portal, patients will be able to access their test results faster from the safety of their home,” said Christine Elliott, Deputy Premier and Minister of Health. “It will help reduce the burden on our public health units and frontline health workers, allowing them to focus their efforts where they are needed most during this challenging time.”

“We are at a critical juncture in our fight against COVID-19,” says Ontario Health Minister Christine Elliott

Ontario is also issuing a new emergency order under the Emergency Management and Civil Protection Act that gives public health units the authority to make staffing decisions, despite any collective agreements. That means health units can expand their capacity to implement critical public health functions, such as case and contact management, through the use of volunteers, including the thousands of retired nurses and medical students who have signed up through the province’s website.

The order is based on a recommendation made by Dr. David Williams, Chief Medical Officer of Health, for all public health units to implement more aggressive contact tracing and management in response to the increase of community transmission.

“We are at a critical juncture in our fight against COVID-19,” said Health Minister Christine Elliott. “Our success as a province depends on our ability to quickly and effectively stop the spread of this new virus. These actions offer considerable support to our local health units and give them the authority they need to act and contain COVID-19 in our communities.”