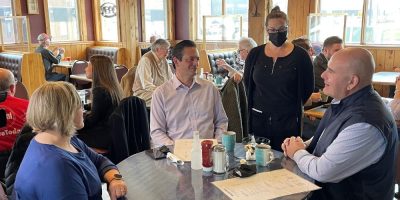 On the eve of the official launch of the Ontario election campaign, Liberal leader Steven Del Duca was glad-handing in Barrie on Tuesday, with stops at Debb’s Place on Huronia Road and at Homestead Artisan Bakery on Dunlop Street.

Barrie-Springwater-Oro-Medonte candidate Jeff Lehman joined Del Duca during the visits in which they spoke about the party’s “affordability” plan.

Later in the afternoon in the studio at Barrie 360, Del Duca touched on several platforms he said would make life more affordable for Barrie residents such as the “buck-a-ride” promise to cut transit fares to $1 per ride across the province until 2024 if the Liberals are elected.

“As a former transportation minister, I know the issues very well,” he stated. “We’ve seen transit ridership really plummet during the pandemic with so many people working from home and others who have been concerned getting onto crowded public transit vehicles with a virus being transmitted, and we need ridership to come back up.”

The plan would also apply to GO Transit and Ontario Northland buses and trains.

Del Duca says the plan would save a GO train commuter from Barrie to Toronto over $400 a month and take about 400,000 cars a day off the road.

He says the Liberals would deliver on their transit promise within the first 100 days of taking office, and it will be in place until January 2024.

Del Duca was pushed on whether “buck-a-ride” should be long-term.

“When we get to that point, as premier, I want to work closely with our municipal partners and talk to the team at Metrolinx to see if ridership has recovered,” he explained. “We anticipate it will recover and come back strongly, and then we’ll make an informed and responsible decision at that point in time about how to go forward.”

The Liberals say the plan will cost $1.7 billion.

Del Duca also turned his attention to a Liberal promise to lift the provincial portion of the HST from prepared food purchases under $20 and pay for it by increasing taxes on wealthy residents and highly profitable corporations.

“As leaders, we cannot be tone deaf or tuned out to what people are going through,” he notes. “Liberals are going to make it eight per cent cheaper with purchases of prepared food.”

Del Duca hopes it will show people that they can have confidence in the Liberals to deliver in the right way to make life more affordable.

Currently, the HST exemption for prepared food maxes out at $4.

Ontario voters will go to the polls on June 2.