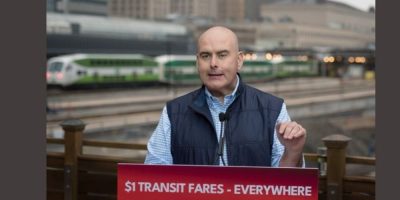 The Ontario Liberals promised Monday to cut transit fares across the province to $1 per ride, if elected.

The election pledge would cost $1.1 billion next year and could take 400,000 cars off the road each day, the party said. The plan would be in effect until January 2024 and would include making monthly transit passes $40.

Leader Steven Del Duca said the move would be a way to both address an affordability crisis, as well as low transit ridership that has been seen as a result of the pandemic.

“As less people are taking transit and life is starting to come back to normal, more people are getting back in cars, and that’s causing congestion on our roads,” he said. “Even worse, it’s making our environment worse off.”

The Liberals are dubbing their plan “buck-a-ride,” a reference to a popular part of Progressive Conservative Leader Doug Ford’s 2018 platform to offer “buck-a-beer.”

Del Duca touted the transit announcement Monday while slamming some of Ford’s investments in highways, particularly the Highway 413 project around the Greater Toronto Area. The Tories say it will save commuters up to 30 minutes, but Del Duca and other critics say that won’t happen and the project will just contribute to sprawl.

The Progressive Conservatives are promising a number of other highway projects, including widening Highway 401 east of Toronto and making improvements to the Queen Elizabeth Way in the Niagara Region. Del Duca said he will invest in highways “where it makes sense.”

“I know that in many parts of Ontario, expanding, rehabilitating our highway system is critically important for goods movement, and for our commuters, and frankly, for the safety of the travelling public,” he said.

Del Duca was asked if he would pay for the promise by reinstating licence plate renewal fees – the Progressive Conservative government recently eliminated them and the move is expected to cost $1 billion in foregone revenue.

“Ontario families are struggling, so we’re not looking to make their life more difficult,” he said.

The $1 transit fares would apply to every transit system in Ontario, including GO Transit, municipal transit services and Ontario Northland service. The party said it would save a commuter taking the GO train from Whitby to Toronto more than $300 a month, for example.

They also pledge to make public transit free for veterans.

The New Democrats said voters can’t trust the Liberals to make transit affordable because when Del Duca was transportation minister in the previous Liberal government, transit “got worse and worse.”

This report by The Canadian Press was first published May 2, 2022