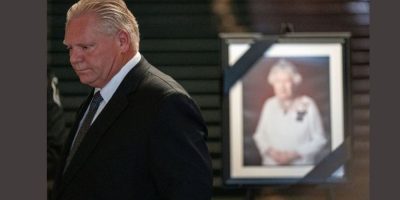 Ontario Premier Doug Ford says the province will mark Sept. 19 as a Day of Mourning for Queen Elizabeth II in lieu of a provincial holiday.

Prime Minister Justin Trudeau has announced that Monday, which is the day of the Queen’s state funeral in London, will be a federal holiday for government employees but it’s up to provincial and territorial governments to declare the holiday for remaining workers.

Federal Labour Minister Seamus O’Regan said employers in federally regulated industries, such as banks and airlines, are not required to recognize the holiday but may opt to do so.

Prince Edward Island is making it a stat holiday, while New Brunswick plans to close schools and government offices, but Quebec’s premier says in that province it will be a day of commemoration, but not a public holiday.

In Ontario, Ford says people may observe a moment of silence at 1 p.m. that day.

He says it will give all Ontarians an opportunity to reflect on the Queen’s life and her “unrelenting commitment to service and duty.”

Ford says it also allows students to be in school learning about the Queen’s contributions and the accession of King Charles III.

This report by The Canadian Press was first published Sept. 13, 2022.