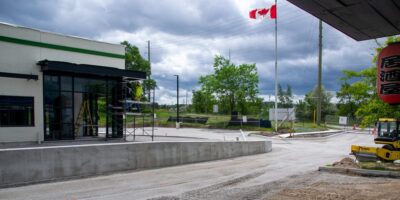 As many restaurants in Barrie make moves to become more health-and-safety compliant as COVID-19 restrictions are eased, two restauranteurs with plans to open locations in Barrie say the impact has hit them in different ways.

“Obviously the contractors,” said Don Kellett, who had hoped to open his new restaurant, North Country, at Barrie’s Five Points over a month ago. “Nobody could work. Everything from electricians that couldn’t come on-site to … I still haven’t put the sign up because they’re having a hard time getting guys to come back to work.”

“They’re suggesting that everybody wear masks but they’re not mandating it,” continued Kellett, pointing out the servers at his existing restaurant, Donaleigh’s Irish Pub House, aren’t looking forward to wearing masks during the summer. “I’m getting pushback from my servers saying we don’t want to work eight hours on a patio you know, breathing in a hot mask and running around.”

Kellett adds hiring for his new location before it opens, hopefully by late July, could be impacted by the federal compensation package.”I think that a lot of people, anyone making under $16 an hour give-or-take, makes just as much money sitting on the couch right now.”

Jody Palubiski hopes to open a Beertown location on Fairview Road in Barrie by November. He says he had to focus all his energies on getting up to snuff on the health-and-safety front. “We were a company that did not function throughout the shutdown,” Palubiski told Barrie 360. “We didn’t try and do curbside, instead we put all our energies into preparing for the inevitable open, what kind of procedures, precautions and systems standards will be putting into place following that.”

Despite having his ducks in a row there, he says there are still worries hanging in the back of his mind. “It’s the uncertainty right now; signing a new lease or committing to construction,” he said. “There’s talk about second waves and all of the other pieces. That’s certainly hanging in the background and hanging in our minds, we’re thinking about it.”

“We tend to, at the end of this, feel very optimistic about where we’re at,” he added, pointing out they are hiring for the new location.

Palubiski says been watching how other provinces have been doing as restaurants reopened fully, and has been heeding advice too. “I do say that there has been a whole lot more phone calls, a whole lot more conversation or sharing ideas. You know, there’s been a level of ‘co-opetition’ in our industry, I would say.”