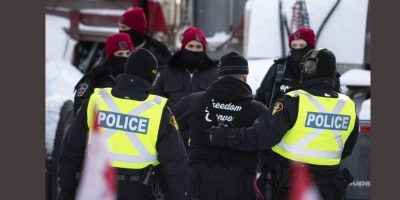 A former senior officer for the Ontario Provincial Police says the “Freedom Convoy” protests in Ottawa could have been ended without the federal Emergencies Act.

Former Chief Supt. Carson Pardy told the public inquiry examining the invocation of the act Friday that plans to clear the protests were consistently delayed because of confusion and disorganization within the ranks of Ottawa police, and that the chief of police didn’t trust his OPP team.

Still, he said he believes the protests could have been ended without a declaration of emergency from the provincial or federal governments.

“In my humble opinion, we would have reached the same solution with the plan that we had without either of those pieces of legislation, within around the same timeline,” he said.

Pardy criticized the Ottawa Police Service for its handling of the situation, saying he expected a warmer welcome when he arrived in the capital with a team of police experts on a cold evening Feb. 8.

It had been more than 10 days since a convoy of big-rig trucks arrived in the capital, with protesters opposed to COVID-19 mandates and the Liberal government embedding themselves in downtown streets and forcing businesses to close.

Pardy said he and his team of experts on public order and emergency planning came from around the country to help, but it was clear that Sloly did not trust them.

“Overall, the tone, I would say, was very antagonistic. It was disrespectful,” Pardy said Friday. Sloly “made it clear,” he said, that he believed people in the provincial ministry “wanted them to fail.”

Pardy said he quickly learned that Ottawa police were still developing a plan to deploy the 1,800 officers they had asked for from other forces, and morale was poor.

In his interview with the commission, Pardy said a significant number of Ottawa police officers “walked away due to unbearable stress.”

Ottawa’s police service is renowned for its skill in handling major events and protests, Pardy said, given its status as Canada’s capital city. But when he arrived in February he asked: “What’s going on? What happened to you guys?”

He said the force was not providing a supportive environment to its officers, and he didn’t see the integration between different police forces that was typical during previous major events in Ottawa.

He spoke about confusion over reporting structures, and said a lack of co-operation, information and resources from Ottawa police delayed the OPP’s ability to help.

Pardy told the commission communications and logistics were “critical points of failure,” saying that not all officers had radios that could communicate with officers from other services.

Two different operational plans to quell the protests were presented to Pardy between Feb. 8 and Feb. 9, he said, and his team noted they the plans had different mission statements.

The Feb. 8 plan was aimed at ending the “Freedom Convoy” entirely, while the Feb. 9 plan would only end unlawful elements of the protest. Pardy said neither plan was complete.

Without receiving more detail from Ottawa police, other forces wouldn’t have been able to commit to sending help, he added.

“You need to know what these people are going to be doing when they get there, right down to where they stay and who’s feeding them,” Pardy told the commission.

“You need those basics in place. None of that was in place.”

The federal Liberals ultimately invoked the Emergencies Act on Feb. 14 for the first time since its passage in 1988.

The move brought in extraordinary temporary powers aimed at clearing the protesters who had occupied downtown streets around Parliament Hill.

The Public Order Emergency Commission, an independent public inquiry required under the act, is examining the circumstances of that choice.

Testimony so far has painted a picture of chaos and confusion among levels of government and police forces as officials determined how to respond to the situation.

Pardy told the commission that after Sloly resigned as Ottawa police chief on Feb. 15, all ambiguity about the plans disappeared.

Notes from a call between Pardy and other colleagues that day, which were presented to the commission as evidence Friday, show he said that “everything we have been doing so far (has) been blocked by OPS chief.”

Sloly is expected to testify before the commission next week. The hearings are slated to continue until Nov. 25 in downtown Ottawa.

Mayoral candidate Catherine McKenney, who has also testified before the commission, said it was inappropriate to make that decision while the inquiry is underway and days before Ottawa’s municipal election Monday.

Stubbs said one of his priorities will be to dig deeper into what happened within the police force during the protests.