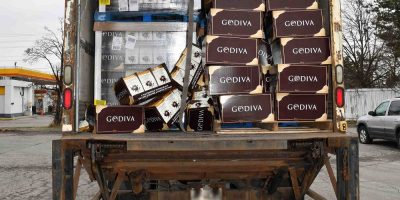 A trio from the GTA could face some sweet justice soon.

York Regional Police say more than $600,000 in stolen chocolate and nuts has been recovered, along with the tractor trailers used to haul them. This comes as part of an ongoing cargo theft investigation.

Polic began probing claims of cargo theft in November, claiming investigators were able to zero in on a group involved in stealing entire loads at a time. The investigation led police to recover a stolen tractor trailer in Toronto, containing 55 skids of chocolate, to the tune of $360,000. That in turn resulted in the seizure of a second tractor trailer in Vaughan, with 22 skids of pecans on board, worth some $270,000.

Three people facing charges including trafficking in stolen goods and vehicle theft, while police add a heroin and crystal meth trafficking charge has been laid on all three suspects.