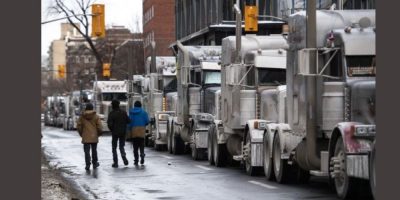 Ottawa convoy organizer Pat King is expected to face two new charges, the day after his bail review hearing came to an abrupt and unexpected halt when his lawyer’s computer appeared to be hacked.

The details of the apparent hacking were protected by a publication ban ordered by Justice Graeme Mew, but he lifted the order Thursday morning.

The rest of the evidence and testimony from court Wednesday and Thursday still cannot be shared.

The Crown announced it would lay new charges against King: perjury and obstruction of justice.

Perjury charges stem from allegations that King made false statements under oath, knowingly and with the intent to mislead. Obstruction of justice charges allege he wilfully attempted to mislead the court in a judicial proceeding.

The new charges were expected to be laid Thursday afternoon, and are in addition to 10 charges related to King’s involvement in the three-week protest in downtown Ottawa earlier this year.

The previous charges include mischief, intimidation, obstructing police and disobeying a court order.

King’s lawyer, David Goodman, was appearing by video conference during the proceedings Wednesday when a robotic female voice started speaking from his computer, warning him not to turn off or restart the machine because his IP address had been accessed.

On Thursday, Goodman said the issue was not as serious as previously thought and none of his files had been corrupted, viewed or sought.

It’s not clear if the apparent attack has any relation to King’s case.

After court, Goodman would not comment on whether he has informed police of the incident.

King has been in jail since his arrest on Feb 18. He was denied bail on Feb. 25.

Goodman was intending to argue for King’s release at the hearing this week, but the proceedings were put on pause.

As court was adjourned Thursday, King shook his head and doubled over in the prisoner’s box. He’s due to appear in court Tuesday when his bail review hearing will be rescheduled to a later date.

Banner image: Trucks are parked on Metcalfe Street as a rally against COVID-19 restrictions, which began as a cross-country convoy protesting a federal vaccine mandate for truckers, continues in Ottawa, on Sunday, Jan. 30, 2022. THE CANADIAN PRESS/Justin Tang