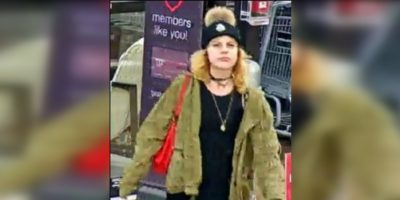 Police are releasing an image of a woman believed to have information on a suspect wanted for a serious incident in the north end of Barrie.

Officers were called out to a plaza at Bayfield and Livingstone Wednesday evening around 7:45, after store staff spotted a man believed to have been behind a previous shoplifting.

An eyewitness tells Barrie 360 the officer approached the suspect, and a woman who was with him, asking them to step outside. The witness tells Barrie 360 a struggle ensued in the vestibule of the store. The woman was seen running back into the establishment crying, while the suspect and officer fought. Police say the suspect grabbed for the officer’s gun, but wasn’t able to get his hands on it and fled into a waiting car instead.

An arrest warrant has since been issued for the 29-year-old suspect, while they have labeled the woman pictured here as a person of interest. Police would like to speak to her about the incident.

The officer was treated for minor injuries at hospital, and has since been released.