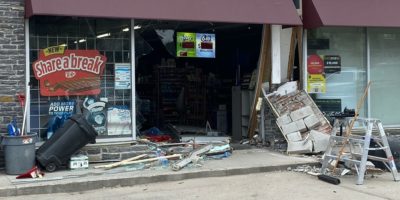 The Barrie Police Service is probing a break and enter in the city’s south end, saying someone used a pickup truck to get in.

Police say someone rammed the front of a Bayview and Little-area convenience store with a pickup truck in order to gain entry Friday morning.

Barrie Police spokesperson Peter Leon tells Barrie 360 two suspects were seen fleeing the scene on foot, and despite the K9 unit conducting a thorough search, no arrests have been made yet. Leon adds this took place in a plaza with plenty of video surveillance and suspect descriptions are forthcoming.

The truck has since been seized and is being forensically analyzed. Police couldn’t immediately say what was taken in the theft, as the truck damaged the structural integrity of the store so much so that engineers needed to shore up the structure before investigators could safely enter.

Anyone with information on this crime is encouraged to call Barrie Police at (705)725-7025.