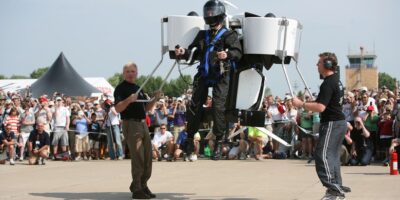 The Federal Aviation Administration said Tuesday they are investigating reports from airline pilots that a “guy in a jetpack” was flying close to their planes as they approached Los Angeles International Airport to land. But one jetpack expert told CBS News he doubts the pilots actually saw the technology.

“Two airline flight crews reported seeing what appeared to be someone in a jetpack as they were on their final approaches to LAX around 6:35 p.m. PDT Sunday,” the FAA told CBS News.

CBS Los Angeles obtained recordings of communications between the aircraft and the tower last weekend. “Tower, American 1997, we just passed a guy in a jetpack,” a pilot said.

“American 1997, OK, thank you, were they off to your left side or your right side?” the controller asked.

“Off the left side at maybe 300 yards or so at our altitude,” the pilot said.

Another pilot also reported a sighting.

“We just saw the guy pass by us in the jetpack,” he said.

But experts have responded to the report with skepticism. CBS News correspondent Kris Van Cleave reports there does not appear to be a jetpack on the market that could get someone to an elevation of roughly 3,000 feet and back to the ground safely. That would require a lot of fuel or a parachute. No parachute was seen.

David Mayman, CEO of L.A.-based Jetpack Aviation, told Kris Van Cleave that he was also doubtful it was a jetpack.

“They’d run out of fuel, they use fuel too quickly,” Mayman said, adding that a typical flight time for a jetpack is just 5 to 10 minutes. “If it’s a real jetpack, it’s noisy.  People would have heard it take off and land.”

Mayman says Jetpack Aviation is under contract with the U.S. military to do research and development on this kind of technology, they do not sell it commercially and they have confirmed it was not any of their aircraft.

He added that jetpack technology is not commonly available so “whoever flew this probably built it themselves,” which leads him to believe it was more likely a large drone.

The FBI has also launched an investigation.