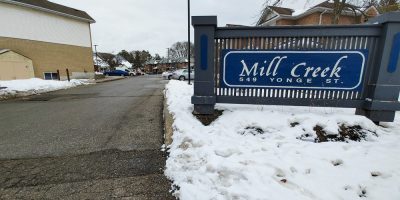 Barrie Police are looking for clues following reports of an attempted murder just before the new year.

Officers were called to a townhouse at Mill Creek, a condo complex at Yonge St. near Little Ave., shortly before 10 p.m. on December 30 with reports the home’s patio door had been shot out. Witnesses report hearing at least five shots fired, while no one was struck by any bullet.

A police perimeter was established and a canine search commenced; police report finding two sets of fresh foot prints in the area, but say it appears the people who made them were able to elude officers by unknown means.

Investigators can say the suspects were dressed in black, while both wore white socks and at least one of them was armed with a small calibre firearm. Police believe the incident is an isolated one, and there is no risk to public safety.

Anyone living in the townhouse complex who may have information or security video of this shooting is asked to contact Detective Constable Mathew Mulhall at 705-725-7025, extension 2561.