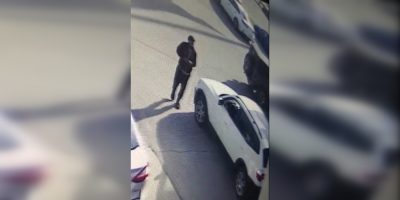 South Simcoe Police have released a video and images of suspects wanted in connection to a series of vehicle and gas thefts.

At around 5:30 p.m., Thursday, April 22, a motorist reported her vehicle, a white BMW X3, was stolen while she went in to pay for gas at a station at Highway 88 and Highway 400. The vehicle was left unoccupied and with the keys in the ignition.

The victim noticed that a dark-coloured Jeep appeared to have been following her BMW after the theft.

Investigators later determined the stolen BMW was involved in two thefts of gas. One occurred in southwestern Ontario on the same evening as the vehicle’s theft. The other was on April 27 at a gas station at Highway 89 and the 400. The same night as the Innisfil gas theft, the Jeep was located in Mississauga. Police say it was stolen from a dealership in Etobicoke.

The South Simcoe Police Service has since obtained a few security camera images and footage and are making them public to help identify the suspects. Anyone who recognizes the suspects or has information regarding these occurrences is asked to contact Constable Jeff Cowie at jeff.cowie@southsimcoepolice.ca or Constable Jon Ellis at jon.ellis@southsimcoepolice.ca, call 905-775-3311, 705-436-2141 or contact Crime Stoppers.