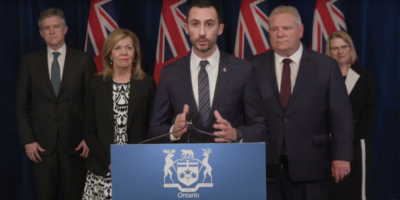 Ontario Premier Doug Ford and Health Minister Christine Elliott are being tested for COVID-19, a step taken out of caution after Education Minister Stephen Lecce reported he may have been exposed.

A statement from the Office of the Premier said Minister Lecce recently came into contact with someone with a confirmed case of the virus. Lecce has since said his test came back negative for the virus.

This comes one day after Lecce stood on the podium with the Premier and Health Minister for an announcement on child care.

Both Ford and Elliott did not take part in Wednesday’s news briefing from Queen’s Park “out of an abundance of caution.”

“Premier Ford and Minister Elliott will be getting tested today. Both will continue to monitor for symptoms and take appropriate action as necessary,” spokesperson Ivana Yelich said in a statement.

Minister of Colleges and Universities, Ross Romano said he was only notified about the situation a few minutes prior to his scheduled announcement.

In-person instruction to continue at colleges and universities

Romano announced that colleges and universities will be allowed to continue with in-person instruction during the summer.

The province is allowing “limited in-person education and training” for students who were not able to graduate due to COVID-19 closures.

“It’s critical that we allow students to complete their studies and graduate so they can join the workforce in high-demand, frontline roles and help put the province back on the path to prosperity,” Romano said.

The first phase will allow institutions to reopen to provide in-person instruction to students in essential, frontline, and high labour market demand areas, such as nursing, personal support workers, engineering, and other critical profess

Romano said all students will be able to attend postsecondary education virtually, in-class and through a hybrid format this September.

According to a tweet from Health Minister Elliott, 59 of today’s new cases are related to an outbreak in southwestern Ontario.

There are now 3,486 active COVID-19 cases across the province