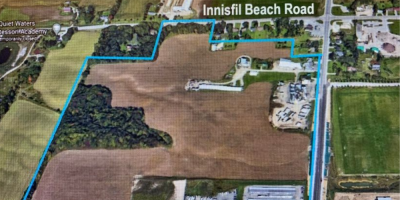 Premier Doug Ford announced the funds during a news conference at RVH in Barrie on Friday afternoon.

Last October, RVH said the location of the new south campus would be on an 83-acre property at Yonge Street and Innisfil Beach Road.

“The south campus will open in 10 years as an outpatient health hub evolving to a full-service hospital in 20 years seeing almost 350,000 patients each year,” Jance Skot, RVH President and CEO said at the news conference.

The development of the Innisfil facility will move along at the same timeframe as the 10-year plan to expand the existing RVH on Georgian Drive.

“The hub will provide urgent care services, day surgeries, and providing faster access to procedures in relieving capacity on the hospital’s emergency department,” he noted. “This redevelopment will put patients first and ensure they can receive high quality, timely care when they need it.”

Skot said the driving force behind a south campus is the region’s booming population.

“We know the population of south Simcoe County is going to double over the next couple of decades, and if the pandemic has taught us anything, it’s that we ensure we have enough beds and critical care spaces to meet the needs of our exploding population.”

The estimated capital cost of the expansion at RVH and a new hospital in Innisfil is about $3 billion, with the local tab approximately 10 per cent for municipalities and fundraising, with the rest being picked up by the Ontario government.