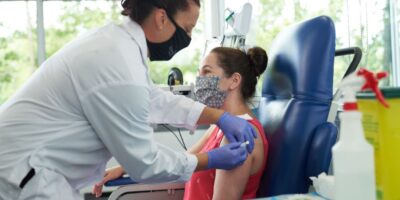 The Ford government says it will speed up its vaccination schedule as it highlights who will be included in phase two of its inoculation program.

On Friday, Premier Doug Ford was joined by COVID-19 Vaccine Distribution Task Force Chair Gen. (ret’d) Rick Hillier to announce everyone age sixty and older should expect to have their COVID-19 vaccine by the end of May, earlier than first expected.

Up to 920,000 extra doses are to be provided to thirteen regions identified as hot spots, which includes Simcoe-Muskoka, as of April. Individual health units will determine how to put those added doses to use.

On top of focusing on Ontarians of a certain age, phase two will also allow for some three million people with various health conditions that leave them more vulnerable to get the shot. Individuals with the following health conditions will be vaccinated as part of phase two, ranked by priority:

The next phase of the province’s vaccination plan also centers on those who cannot safely work from home. The plan calls for two groupings of sectors, with the first group receiving priority access over the other. It is expected vaccinations will begin for the following workers by June:

“We’re now looking ahead and gearing up for phase two, with a focus on vaccinating those who face the greatest risk from this virus,” said Premier Ford. “Our seniors, individuals with specific health conditions, people living in congregate settings, and those who cannot work from home such as first responders.”

The announcement comes on the heels of Health Canada’s approval of the single-dose Johnson and Johnson vaccine for use in Canada, along with news the nation is extending its interval between doses from two to four months.