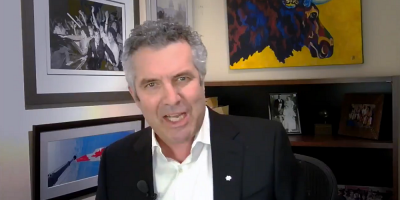 In a bid to build awareness around the province’s Stay-At-Home order, Queen’s Park has kicked off a new awareness campaign called #StayHomeON and has roped a few prominent Ontarians into the fold to help pass along the message.

First to have a kick at the #StayHomeOn can, is prolific ranter Rick Mercer.

Other notable folks have since added their voice to the message, including CFL Commissioner Randy Ambrosie, Toronto Mayor John Tory, Hamilton Ti-cats Head Coach Orlondo Steinauer, and actor Julian Richings. While some are pointing out the message is finally being shared with a sense of humour or levity, others on social media took the opportunity to point out the need for paid sick leave so that people could stay at home.

This is so fucking patronizing. Why not use your unfunny “talents” to advocate for paid sick leave?

wow. this is insufferable on so many levels. why are non-essential stores open (Walmart?), why is there no paid sick leave or day care or psw support for families that need that? staying home is not an option for everyone who works.

Premier Doug Ford was asked this week why his government does not support the notion of paid sick leave during the pandemic. He pointed the finger squarely at the federal government instead, saying a federally-run program isn’t being fully utilized by Ontarians. “Let’s be very, very clear: There’s no reason for the province to jump in there when less than 27 percent of the overall program hasn’t been taken up,” Ford said during a media conference Monday. “There’s no reason for us to duplicate the $1.1 billion with the federal government. And I know the federal government is going to be reviewing it. And hopefully, we’ll have an answer in a very short time here.”

Premier Ford referenced the Canada Recovery Sickness Benefit (CRSB), which provides income support to employed and self-employed Canadians who are unable to work because they’re sick or need to self-isolate due to COVID-19. Those who are eligible for the CRSB can receive $500 for a week, and must reapply for a second week should the situation continue. Canadians can only apply for a total of two weeks between September 2020 and September 2021.