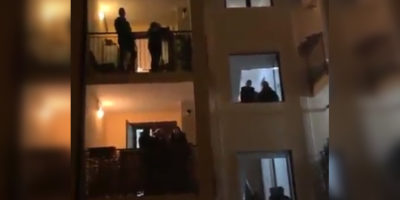 People across Italy are on a mandatory lockdown and will remain isolated until at least next month due to the global coronavirus outbreak, While 60 million people in the country are stuck at home, some are making the most of it. In Siena, a city in Italy’s Tuscany region, people joined together in song, as darkness fell over the vacant streets.

Video posted to Twitter shows one man start off the tune, then from their windows, an entire street full of people join in, filling the night with beautiful singing.

The haunting video was shared by Italian journalist David Allegranti on Thursday night, and has been viewed nearly one million times on his account. “In Siena, the city to which I am very attached, you stay at home but you sing together as if you were on the street. I was moved,” Allegranti wrote in Italian.

Similar moments took place Friday evening in other cities around the country, including Naples and Rome. Reuters reports the nationwide moment of song was organized on social media and WhatsApp.

Allegranti told CBS News his friend sent him the video of quarantined residents singing the folk song. “The Italians are experiencing a very difficult time,” Allegranti wrote in his email to CBS News. “People cling to what they can, including a traditional song like this.”

Allegranti is currently on lockdown in Rome, he said. Siena is a special place to him because he wrote a book about the city, “Siena Brucia.”

As of Friday, there have been more than 15,000 coronavirus cases and over 1,000 deaths in Italy — the most outside of China.

Nine Chinese experts and several tons of medical aid has arrived on a special to flight to Italy to help the country fight the coronavirus outbreak, the most serious in Europe. China, the epicenter of the outbreak that first emerged in December, has said the peak of the epidemic has passed in the country after a steady decline in the number of new cases.

The specialists had “been on the frontline since the first day in the epicenter of the virus,” said Francesco Rossa, the president of the Italian Red Cross. “The exchange of experiences with our researchers is important.”

After battling the deadly epidemic for several months, China has also sent support to Iran and Iraq to help fight the illness.