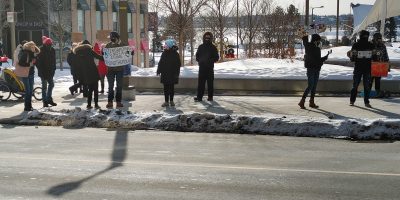 A small but vocal crowd held a rally at Meridian Place in downtown Barrie on Saturday to demand justice in the wake of a violent arrest that was caught on video and has made the rounds on social media.

Some people held signs that read ‘Abolish the police’ and ‘ Skateboarding is not a crime,’ while others shouted crude comments about the police.

“In an effort to ensure the process is transparent and accountable I have asked the Ontario Provincial Police to conduct the investigation into the events that took place in Barrie on February 4,” Chief Kimberley Greenwood said in a statement. “I acknowledge the public’s concerns being expressed based on the limited availability of information at this time. I want to assure the community that any findings of misconduct will be pursued.”

Police have charged a 20-year-old man with causing a disturbance and assault in an attempt to resist arrest.

The officer seen on the video has been reassigned pending the outcome of the investigation.