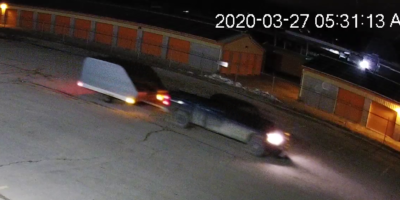 Orillia OPP is investigating a series of snowmobile thefts in the region that has taken place over the past few days.

Between March 24 and March 28, a total of five snowmobiles were stolen.

On March 24, at least three suspects entered a fenced area at a Harvie Settlement Road business in Orillia and stole a snowmobile trailer containing two sleds. Surveillance footage shows a dark Chev Silverado with dark coloured rims. A red and grey 2015 Skidoo and a yellow 2009 Skidoo MXZ 550 were stolen in this occurrence.

Three days later, thieves drove a truck into a fenced area at a business on West Street South in Orillia and stole a covered trailer containing two snowmobiles. Again, surveillance footage revealed a Chev Silverado truck with an extended cab and dark coloured rims. Stolen items include a black 2016 Skidoo 800, a yellow 2000 Skidoo MXZ and a grey 2010 Blazer trailer.

Then, overnight between March 27 and March 28, a dark coloured, late model Chev Silverado was at a Ramara Township home and a trailer containing one snowmobile was stolen. The sled is a 2015 Skidoo GSX.

OPP believe these thefts and other recent snowmobile thefts in the region are related.

Call Orillia OPP or Crime Stoppers if you have any clues.