South Simcoe Police have made a renewed appeal for witnesses to contact them regarding a collision that claimed the life of a motorcyclist in Bradford.

The crash happened on Saturday May 16 around 5:30 p.m., on Yonge Street just north of the 9th Line.

Police said a northbound car struck a southbound SUV, then hit a motorcycle.

The motorcycle rider, a 35 year old East Gwillimbury man, died at the scene.

Investigators want to hear from witnesses who may have seen any of these vehicles or have dashcam footage while on Yonge Street between 5:15 p.m. and 5:30 p.m. on May 16. 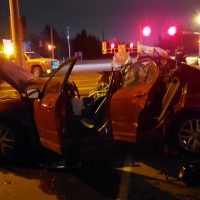