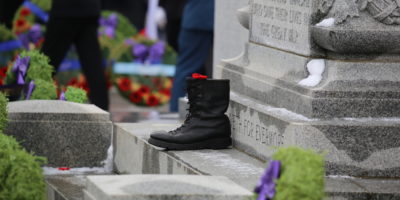 Traditional Remembrance Day ceremonies will not take place next month because of the pandemic.

The City of Barrie said acting on the advice of the local health unit, there will be no public ceremony at the Memorial Square cenotaph, and residents are being asked to pay their respects on November 11 from home or virtually.

Members of the community can lay a wreath at the Memorial Square cenotaph, if they place their order with the Barrie Legion by November 4 or if they can drop a wreath off at the Legion Hall (410 St. Vincent Street, driveway entrance off Ferris Lane) between 12 and 4 p.m. on November 10 or prior to 9 a.m. on November 11. The wreaths will be respectfully placed at the cenotaph in downtown Barrie, and anyone wishing to keep their wreath can pick it up from the cenotaph on November 12.

Veterans will still be able to ride Barrie Transit free of charge, with one companion, all day Remembrance Day by showing anything that identifies status as a veteran.

The local Royal Canadian Legion in Orillia confirmed on Tuesday that Remembrance Day ceremonies have also been cancelled. They are normally held at the cenotaph at Orillia Soldiers’ Memorial Hospital.

“We’re disappointed but we know it’s the absolute right thing to do in light of the circumstances we are all facing,” said Rick Purcell, 1st Vice-President of the local Legion.

“Given the location of the service at the main entrance to the hospital, and our community’s steadfast admiration for those who served, there is no way we could have ensured that outdoor gathering limits could be safely maintained.”

The legion has partnered with Rogers Cable to pre-record a Remembrance Day service at Veteran’s Park, outside Legion headquarters in Orillia, which will be re-broadcast on Remembrance Day.

“There have been previous years where we’ve been forced to move the ceremonies indoors due to inclement weather, but this is the first time we’ve had to cancel the ceremonies outright,” said Purcell.