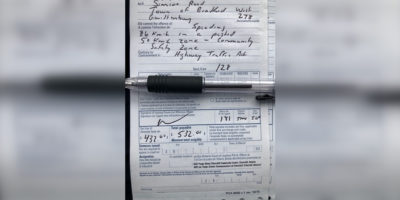 Timing is everything it seems, including in catching speeders.

A South Simcoe Police officer was out on Simcoe Road at Catania Avenue in Bradford Tuesday morning, speaking to a local resident about concerns of speeders in the area, when an alleged high miler approached.

The officer grabbed the radar gun and clocked a vehicle at 86km an hour, in a 50 zone.

A Schomberg man will face over five hundred bucks in fines, as police say he was speeding through a Community Safety Zone.