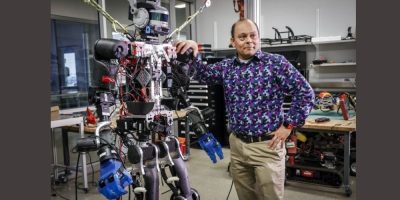 By Bill Graveland in Calgary

It could be a character on a Saturday morning kids show, but this rescue robot is anything but fantasy.

“It’s not science fiction. It’s science and this thing exists,” said Alejandro Ramirez-Serrano at the unmanned vehicles robotarium lab at the Schulich School of Engineering at the University of Calgary.

The robot is a man’s height with a space-age helmet for a head, working arms and legs, and interchangeable hands. It looks like a cross between RoboCop and a Transformer.

Ramirez-Serrano has been working on the robot for the last seven years. He hopes it will become a tool to help first responders with disasters such as the collapse of a building.

The goal is to have search-and-rescue robots, which are faster than humans, working in confined spaces and, in the most challenging circumstances, be fully autonomous.

“It does walk … (and) can change its locomotion style and go from walking to crawling to climbing,” he said.

“It has sensors to perceive the environment, create a 3D map of the space and (can) calculate how stable it is to decide what locomotion style to use.”

Ramirez-Serrano said his is the only group in North America and one of only two in the world working on how to deploy robots in confined, chaotic and unstructured spaces for which little information exists.

But it could be another decade before autonomous rescue robots will be ready to use, he said. Robots are already used for some disasters or for bomb disposals, but they are controlled by humans using remote controls.

What needs to be developed is a more advanced artificial intelligence, Ramirez-Serrano said.

“For example, we could have a building collapse. There are victims inside. There’s no recipe. So we’re developing artificial intelligence to enable the robot to be able to perceive the environment and make decisions on the fly.”

Ramirez-Serrano’s robot weighs about 70 kilograms, but he’d like to make it lighter. He estimates it could lift up to 90 kilograms. It’s battery-powered but only works for about 45 minutes.

As with the self-driving car, it might take some time for humanity to get used to a machine able to think for itself, he said. That’s another hurdle that needs to be overcome.

“The robots are coming to get us,” he laughs.

Banner image: Schulich School of Engineering Prof. Alejandro Ramirez-Serrano leans on one of his robots at the University of Calgary’s unmanned vehicles robotarium lab in Calgary on Tuesday, June 14, 2022. THE CANADIAN PRESS/Jeff McIntosh