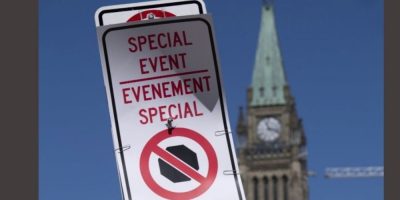 By Laura Osman, Sarah Ritchie and Erika Ibrahim in Ottawa

“Rolling Thunder” protesters have begun to arrive on Parliament Hill, where Ottawa police have created an exclusion zone around several blocks downtown and called in hundreds of extra officers in preparation.

People wearing black leather motorcycle jackets while waving or wrapped in Canadian flags could be seen all along Wellington Street, the main drive in front of Parliament Hill, and milling around the National War Memorial ahead of Friday evening’s planned rally.

Meanwhile, police vehicles from all over Ontario, including the Ontario Provincial Police and York Regional Police, were seen patrolling downtown streets.

Hundreds of motorcyclists are expected to arrive Friday ahead of a gathering Saturday morning. They plan to do a loop around the downtown, with a stop at the War Memorial and march to a rally on Parliament Hill.

Vehicles involved in the rally won’t be allowed into a zone that includes the war monument and Parliament, police say, nor will they be allowed to stop along the route, but participants can walk through the area.

The “Rolling Thunder” group has not been clear about the cause they’re rallying for, except to say they will be in Ottawa to “peacefully celebrate our freedom,” and they oppose the removal of veterans from the War Memorial during a convoy protest in February.

Some of the early arrivals on Parliament Hill ahead of the rally Friday said they were part of the demonstration that seized downtown Ottawa for most of February in protest of COVID-19 restrictions and the Trudeau government.

Angela Manella from North Bay, Ont., said she was in the national capital to protest the vaccine mandates in February, and she’s returned because the mandates are still in place.

“My experience of the convoy protest was that there was so much love and connection and just such good energy,” Manella said Friday next to the Centennial Flame on Parliament Hill.

She said there was a sense of community among protesters at the convoy in February, and that may be part of what is drawing people together again.

Others who gathered near the War Memorial said they are only in Ottawa this weekend to honour veterans who police removed from the site along with the rest of the protesters in February.

For three weeks in February, protesters created encampments in downtown streets, which were packed with big rigs adorned with messages speaking out against vaccine mandates, COVID-19 restrictions and the prime minister.

While protesters described the scene as peaceful, joyful and even festival-like, nearby residents remember it as a nightmare — one they don’t want to relive.

“A lot of them are concerned, some are scared and some are mad,” said Mary Huang, president of the Centretown Community Association, which represents the neighbourhood closest to Parliament Hill.

She said neighbours are still traumatized after the three-week protest. The loud airhorns droning on at all hours of the night meant that many couldn’t sleep, and some people felt intimidated when they left their homes, she said.

They’re worried this weekend will be a repeat, before residents have even had a chance to recover, she said.

Ottawa police have promised they won’t allow another “illegal occupation” of the city, that there will be no tolerance for a long-term protest and any encampments will be dismantled.

A statement on the “Rolling Thunder” website attributed to organizer Neil Sheard says the protesters plan to leave on Sunday, and they do not support “blockades, obstruction of police performing their duties, damage to property or hate and vitriol directed to the residents of Ottawa.”

The statement also encourages supporters to follow the laws, and says police will be held accountable in court for their actions during the event.

“Lastly, as seen during the lawful protest in Ottawa, spread as much peace, love and patriotism to your fellow Canadians as possible,” the statement says.

Interim police chief Steve Bell said this week that people displaying symbols of hate, including swastikas, will be charged. A few such symbols were seen during the “Freedom Convoy” protest earlier this year.

It is not actually illegal to display a swastika in Canada. Police did not immediately respond Friday to a question about what charges would be laid against those wielding hateful imagery.

Prime Minister Justin Trudeau, asked Friday whether he would support an NDP bill to ban hate symbols, said his government would certainly work “across parties” to defend Canadians from harassment.