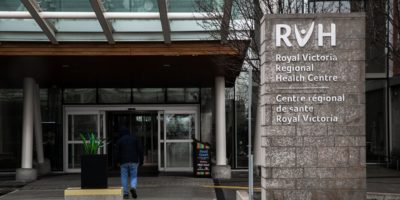 The leader of the province’s Liberal party is calling for mandatory vaccinations of frontline healthcare workers. Barrie’s hospital has made it voluntary while the Premier said he’s not interested in setting any legislation in stone.

Steven Del Duca issued a statement Monday, calling on the province to make COVID-19 vaccines mandatory as a means of protecting Ontario’s most vulnerable, keeping schools open, and keeping the economy running. He says this shouldn’t come at the expense of increased unemployment. “I do not believe employees should lose their jobs. We need to show leadership and focus on overcoming vaccine hesitancy, which punitive firings would do nothing to support,” he said.

Royal Victoria Regional Health Centre does not require its staff to undergo vaccination and will not demand it unless directed by the province. However, staff and physicians are required to declare their vaccination status with the hospital.

Del Duca also called for the securing of the tools needed to provide proof of vaccination, in order to better allow businesses and organizations to develop fair policies should they require clients to be vaccinated. Ford said that would only happen in Ontario if the federal government said so. “I just don’t believe in vaccine certification, and neither does our chief medical officer. If the federal government wants to come out with a passport for people that want to head down south to Florida or in the U.S. or over to Europe, that’s going to be up to the federal government. And I’m not going to balk at that, that’s their jurisdiction.”

On Monday, Public Health Ontario reported 119 new cases of COVID-19 across the province, along with 137 more recoveries and 3 additional deaths. There were 65,920 vaccines administered across the province yesterday, and 11,930 tests were processed.

Locally, there were eight new cases of COVID-19 reported in Simcoe-Muskoka. To date, 68.3 per cent of those aged 12 and up have gotten their first dose of a COVID vaccine, while 53.5 per cent are fully vaccinated.