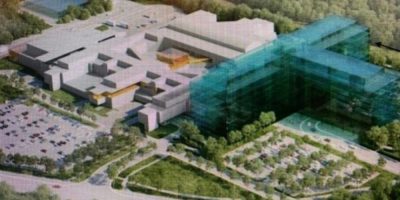 Royal Victoria Regional Health Centre (RVH) has reached another important milestone in its plan to expand the current North Campus and build a new South Campus.

Today, RVH submitted Stage 1 of its expansion plan to the provincial government. This phase of RVH’s capital plan will see the current North Campus on Georgian Drive double in size over the next ten years, while developing the new South Campus in Innisfil.

“This is an expansion plan driven by explosive population growth and a commitment to avoid hallway medicine,” says Janice Skot, RVH president and CEO. “To ensure RVH can continue to meet residents’ healthcare needs in the future, we must secure timely approvals for the plan so we can get shovels in the ground and bring healthcare – and jobs – closer to home as to proceed quickly.”

RVH’s “one system; two site” expansion plan will see the North and South Campus work together as a system of care for residents throughout the region.  Patient care will be integrated, not duplicated, and therefore, construction on RVH’s two campuses must proceed at the same time.

The first phase of the North Campus expansion will be completed over the next decade.  It includes fitting-out empty shelled space in the current facility, building a large expansion which will add more than 240 beds, expand critical care, surgical suites and the Neonatal Intensive Care and allow RVH to enhance almost every service.

RVH will also simultaneously develop the first phase of its South Campus at Innisfil Beach Road and Yonge Street, beginning with an ambulatory Health Hub built within ten years. The hub will focus on outpatient clinics, day procedures, minor medical procedures and diagnostic tests. This phase will also include an Urgent Care Centre. The South Campus will evolve to become a full-service hospital within 20 years.

Community consultation has been foundational to RVH’s planning and the health centre has spoken with residents throughout every corner of Simcoe Muskoka, logging more than 63,500 engagement interactions over the past three years. That consultation continues as RVH begins detailed site planning for the South Campus.

“There will continue to be many opportunities for area residents, patients, families and partners to provide input and shape our plans,” says Skot. “Developing a hospital is complex and timelines can be long. With support of the Ontario government, we look forward to moving quickly through the province’s five stage approval process.”