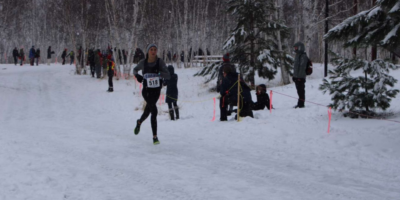 On the snowy, freezing morning of November 2nd in Kivi Park (Sudbury), St. Joan of Arc Catholic High School (Barrie) Grade 9 student, Kyla Martin, made her school extremely proud. In the novice division at OFSAA for cross country, Kyla finished in first place, the first time a St. Joan of Arc student has achieved the feat in nearly a decade.

To truly understand what an accomplishment this was, one must first understand how difficult it is to even reach OFSAA. Kyla thanks the coaches at St. Joan of Arc, along with her coaches at her running club (SSD), saying that “Her coaches have helped [her] prepare for this ever since September.” Her training consisted of practices 3 days per week, along with her own separate runs.

Before OFSAA, Kyla first had to place well in the GBSSA event before she moved on. However, Kyla “had been sick the week before [OFSAA], so it was really hard to get [her] mental game back at it”. Kyla knew what was ahead, and knew she needed to prepare mentally, as well as physically.

Kyla arrived at the park where her race would take place around 9 a.m. and warmed up until 10 a.m. when it was finally time to show the province that every moment of her hard work up until then was well worth it. The race began, and though Kyla didn’t know she would do so well, she hoped for the best.

The weather conditions were horrific, deep snow and cold winds blew while the girls ran, making things just a little more difficult for Kyla. She knew 400M into the race that she had a chance at success and a big one at that. She reports that she knew she could place, but that she knew it wouldn’t be easy. She felt relieved once she finally took the lead and could focus on staying ahead of the pack. Finally, Kyla crossed the finished line with no one ahead of her.

Kyla describes the feeling she had after the race as shock and a sort of numbness. She knew she had won, but it didn’t sink in until later. Everyone at St. Joan of Arc celebrates this massive achievement with Kyla, as well as her own family and friends.

As for anyone else wanting to compete in running, Kyla offers some simple advice: “A lot of the challenge of competing is mental ability, so if you believe you can do it, then you can do it.”

Overall, Kyla’s friends, family, coaches, and her community are extremely proud of her accomplishment. It’s clear to see that Kyla’s hard work paid off and that she is a true example that you can do anything if you put your mind to it.