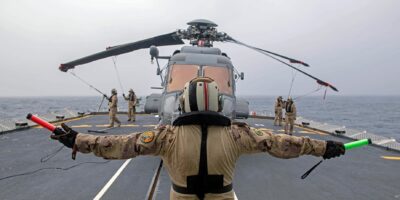 Officials have called off the search and rescue mission for a helicopter that crashed off of Greece, killing six Canadian service members.

Rear-Admiral Craig Baines says the recovery team was able to locate wreckage and unidentified human remains 3,143 metres below the surface.

The CH-148 Cyclone Helicopter crashed during Operation Reassurance on April 29 in the Mediterranean Sea.

The crash killed six members of the Canadian Forces, though the remains of only one, Sub-Lt. Abbigail Cowbrough, have been identified.

Baines said that no portion of the main cabin was left intact, and pieces of the helicopter were found in clusters over a debris field of about 260 metres by 230 metres, or “two football fields wide, by two-and-a-half football fields long.”

There was no word from officials on the cause of the crash.