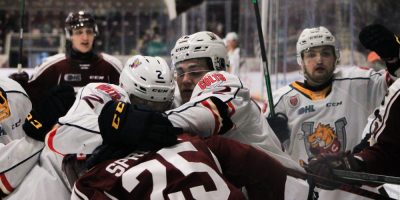 The Barrie Colts capped off a forgettable weekend of hockey Sunday afternoon in Peterborough with yet another shaky performance in the second period.

For the third time in three games, the slumping Colts gave up four goals in the middle frame, this time leading to an 8-3 pasting at the hands of the host Petes at Peterborough Memorial Centre.

The loss was the fifth-straight for the Colts (33-25-6-1) and ended any hopes of them earning home-ice advantage in the opening round of the OHL playoffs.

The win guarantees the Mississauga Steelheads fourth place in the Eastern Conference standings and the extra home date when they host the Colts in a best-of-seven first-round series slated to begin in nearly two weeks.

Joe Carroll had a goal and two assists and Konnor Smith, Chase Stillman, Tucker Robertson, Emmett Sproule and Jax Dubois each scored once and added an assist to help Peterborough (28-33-5-1) move into a tie with the Ottawa 67’s for seventh place in the Eastern Conference standings.

Sam Alfano and Quinton Pagé also scored for the Petes who swept all four games against Barrie this season, including a 1-0 win earlier this week on Tuesday.

Tyson Foerster and Ethan Cardwell each had a goal and assist and Oliver Smith also scored for the Colts who finish off their 2021-2022 regular season schedule with a game at Owen Sound on Wednesday, home to Hamilton on Thursday and on the road against Niagara on Saturday.

Tied 2-2 early in the second after Foerster’s fifth of the season, the Petes broke the game wide open scoring four times in a little more than eight minutes.

Colts rookie goalie Nolan Chartrand took the brunt of the punishment, giving up five goals on 13 shots before he was replaced by Matteo Lalama at 11:33 of the second period.

Barrie, which has spent most of the last month without injured starter Mack Guzda, gave up 23 goals on the weekend which also included losses to Kingston (9-3 on Friday), and North Bay (6-1 on Saturday).

ICE CHIPS: Cardwell (illness) returned to the lineup Sunday after missing the two previous games. . . Barrie outshot Peterborough 29-21. . . The Colts were scoreless on three power-play chances, while the Petes were 0-for-2. . . Ryan Del Monte (concussion) has now missed 44 games over the last two seasons.