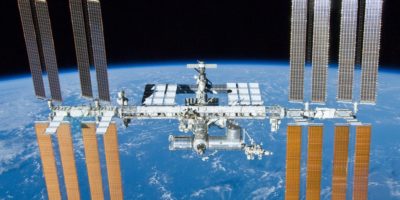 Two days after a dramatic docking abort, an unpiloted Russian Soyuz spacecraft glided in for a picture-perfect linkup with the International Space Station late Monday, using a different port the second time around. In the process, it was confirmed that the problem Saturday was with faulty rendezvous equipment in the original docking port.

“The Soyuz MS-14, on its second attempt, is home at the aft port of the Zvezda service module, completing the first phase of its test flight,” said Rob Navias, NASA mission control commentator at the Johnson Space Center in Houston.

Approaching from behind and below, the Soyuz MS-14/60S spacecraft, launched last Wednesday from the Baikonur Cosmodrome in Kazakhstan, docked at the Russian Zvezda module’s aft port at 11:08 p.m. EDT. On board: 1,450 pounds of cargo and an experimental 350-pound humanoid robot known as the Skybot F-850.

Built to carry out a variety of relatively complex tasks, piloting a Soyuz is far beyond the robot’s capabilities. As with the original docking attempt early Saturday, the Soyuz flight computer was in charge of the rendezvous and docking.

And it went off without a hitch. The spacecraft appeared rock solid as it lined up on the Zvezda port and slowly moved in for an on-target docking.

“Again, the second time was the charm,” Navias said. “A flawless approach, perfect operation of the KURS automated rendezvous system on both the Soyuz and on the passive side, the Zvezda service module.”

The original approach early Saturday went smoothly but when the Soyuz should have started moving in for docking, at a distance of about 300 feet, the Russian KURS navigation system was unable to lock onto the upper Poisk module, the intended docking port.

Television views from the station showed the spacecraft slewing about its long axis as if searching for a signal.

With a possibly misbehaving spacecraft within a stone’s throw of the station, the Russian flight director ordered an abort and the Soyuz dutifully backed away in a pre-programmed maneuver.

Reviewing telemetry, engineers concluded the problem likely was caused by a faulty amplifier in the Poisk module’s passive KURS system, which normally sends out signals approaching spacecraft use to help calculate trajectory and velocity.

Tests confirmed the KURS equipment in the Zvezda module was working normally, and Russian mission managers approved an impromptu plan to move the Soyuz MS-13/59S spacecraft already docked there to make way for the unpiloted spacecraft.

Skvortsov then manually guided the craft to a problem-free docking at the Poisk module.

Because the craft was under manual control, the faulty navigation equipment used by the Poisk docking port was not needed and with the Zvezda port now available, the unpiloted Soyuz MS-14/60S spacecraft made a second approach to the station and docked without incident.

It’s not yet known when the Russians will attempt to repair the passive KURS system in the Poisk module. A spacewalk likely will be required, but no details have been released. Next up for the space station crew: overseeing the release of a SpaceX Dragon cargo ship loaded with science samples, space station hardware and trash. The crew plans to unberth the Dragon and release it from the station’s robot arm around 10:42 a.m. Tuesday. Splashdown in the Pacific Ocean southwest of Long Beach, Calif., is expected at 4:21 p.m.