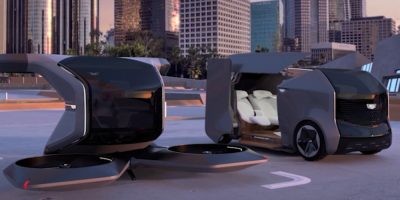 GM showed off two new self-driving Cadillacs at the Consumer Electronics Show earlier this month and now all we want to do is go for a ride.

The first vehicle to be shown off was an autonomous car with a spacious cabin that fits several people. While the car itself isn’t anything to write home about (though, it did bring back images of Minority Report) the real technology was packed into the cabin itself. It uses biometrics sensors to monitor passenger vitals and then automatically adjust things like temperature, humidity, lighting, and even, scents. So, the next time you have a long car ride with dad after he eats a three-cheese burrito, this car has got your back when it comes to covering up the smell.

The second, slightly cooler vehicle that was shown off was a VTOL (vertical takeoff and landing) concept. Using something they call “Verty Ports”, this vehicle will meet you on a rooftop and drop you off across town without having to wade through the city or get stuck in traffic. It’s fully electric too, using its engine to power four rotors around the corners of the vehicle. There’s also a window right upfront, so you can watch the city float by beneath you (Whether that’s good or bad depends on your relationship with heights).

While these self-driving Cadillacs are both concepts and won’t be heading into production (their sole purpose is just showing off Cadillac tech), they’re still very cool and the idea of hopping into a vehicle that lifts you hundreds of feet up, across the city, is something we can’t wait for.

What do you think? The peak of luxury or flying deathtrap?