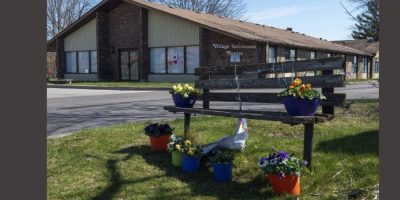 Seniors and advocates are terrified and livid over Ontario’s move to allow hospitals to send patients into long-term care homes not of their choosing.

Patricia Spindel, the co-founder of the advocacy group Seniors for Social Action Ontario, said she lives in fear of being sent to a hospital and then off to a home far from her family.

“As somebody who’s 74, I can tell you it is extremely unnerving,” she said.

“Anyone over 70 right now must be shaking in their boots to think that this government might force them to be placed in an institution that’s not even in their own community.”

On Thursday, the province introduced legislation that would allow hospital patients awaiting a bed to be transferred to a “temporary” home while they await space in their preferred home.

The province made the move in an effort to ease pressure on Ontario’s beleaguered hospitals, which are facing severe nursing staffing shortages that have forced emergency departments across the province to close for hours or days at a time this summer.

The new bill focuses on patients who are well enough to leave a hospital to an “alternate level of care.” If passed, the legislation would allow “certain actions to be carried out without the consent of these patients.”

Those actions include allowing a placement co-ordinator to choose and authorize admission to a home, according to the bill.

However, the bill says the “actions cannot be performed without first making reasonable efforts to obtain the patient’s consent.” It also says it “does not authorize the use of restraints in order to carry out the actions or the physical transfer.”

Long-Term Care Minister Paul Calandra said Thursday the government is “not going to be forcing anybody out of a home.”

“The changes do allow us to continue that conversation to explain to somebody who is in a hospital why their needs can be met in a long-term care home,” he said.

Several advocates were angered by the changes, including Jane Meadus, a lawyer with the Advocacy Centre for the Elderly who fights for the rights of those in long-term care homes, hospitals, and psychiatric facilities.

“What this also does is take away the fundamental cornerstone of consent, which is built into our legislation, which has been upheld by the Supreme Court of Canada, that certain things require consent, especially in the medical context, and this is no different,” she said.

“This is a breach of fundamental justice and fundamental rights of people, specifically the elderly and people who are disabled.”

Meadus said the only appeal process mentioned in the bill is if a patient is deemed ineligible for long-term care.

“There’s no way to appeal if you are being forced into a home that you don’t want to go to,” she said.

There are about 5,800 patients currently in hospital who could be sent to an alternate level of care facility if beds were available, the Ontario Hospital Association said this week.

The ministry said about 40 per cent of those patients are on a wait-list for long-term care. It says the legislative changes could mean 200 of those patients end up in nursing homes by the end of fall and up to 1,300 patients within six months.

Vivian Stamatopoulos, a long-term care researcher and advocate at Ontario Tech University, was outraged by the bill, particularly that people could be moved to homes far away from their loved ones.

“It is so repugnant that they are putting our most vulnerable in that position,” she said.

The majority of residents in long-term care have dementia, Stamatopoulos said, so their caregivers become substitute decision makers and powers of authority.

“How can you do that if you’re hours away?”

In a statement Friday, Calandra said the government wouldn’t move people far from their communities.

“Our government is making sure patients whose doctors have said they no longer need hospital treatment receive the right care in the right place, while ensuring they continue to stay close to their family and friends,” he said.

Stamatopolous compared the legislation to the periods of the COVID-19 pandemic when families were banned from the province’s long-term care homes for months at a time. Many residents died alone during that time.

Alessandro Presenza, who lost both his parents in long-term care homes during the pandemic, said the changes could mean long-term patients will be isolated from family.

He was banned from seeing his father in a nursing home in Sudbury, Ont., when the first lockdown came in March 2020. His dad died alone 10 days later.

“Did we learn nothing from the tragedy of what happened in long-term care during the pandemic?” he said.

Banner image: Flowers sit on a bench in front of Orchard Villa care home in Pickering, Ont. on Monday April 27, 2020. The province has introduced legislation that will allow hospital patients waiting for a bed in long-term care to be sent to a home without their consent.THE CANADIAN PRESS/Frank Gunn